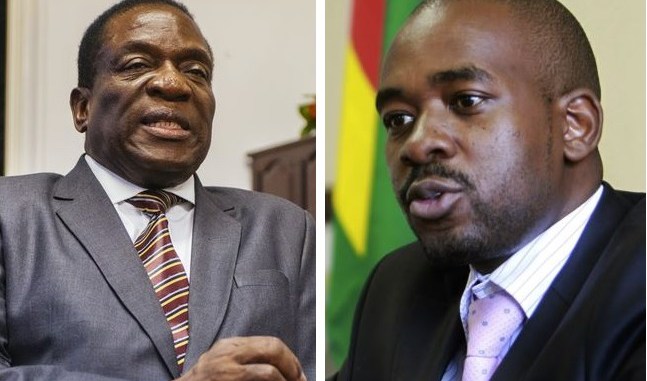 CHURCHES under the banner of the Zimbabwe Council of Churches are leading efforts to bring President Emmerson Mnangagwa and opposition MDC Alliance leader Nelson Chamisa to the negotiating table to break the post-election conundrum characterised by a worsening cash crisis and escalating shortages of some basic products.

Mnangagwa and Chamisa were the main contenders in the July 30 poll, seen as key to pulling the southern African nation out of international isolation and launching economic recovery.

But Chamisa rejected Mnangagwa’s victory despite the Constitutional Court throwing out his petition challenging the result and has since maintained that he won the election, regularly calling his rival “illegitimate”.

Mnangagwa, despite a widely condemned army crackdown on opposition supporters that left seven people dead on August 1, has offered an olive branch to ihs nemesis, saying he has “a vital role to perform in Zimbabwe’s future” and proposed an official Westminster style “Leader of Opposition” post in Parliament for his rival.

The army crackdown is now being probed by a commission headed by former South African President Kgalema Motlanthe.

Churches disclosed their plan at the Alpha Media Holdings (AMH) Conversations platform on Wednesday, which was attended by clerics, captains of industry and diplomats to interrogate how Zimbabwe could move forward.

“The process of envisioning is not an easy one. It must be painful and it is supposed to give nightmares to us because we are trying to grapple with our past trying to make sense of the present. But we are also trying to envision where we are going as a nation,” ZCC vice-president Bishop Solomon Zwana told the gathering.

“Let us try to find ways to move our nation forward. Yes, there is a period of problems and there must be another period of strategising and yet another phase of moving forward and not continue to mourn without trying to look for practical ways of moving forward.”

The ZCC officials later met with Chamisa at the Anglican Cathedral in Harare on Wednesday evening.

ZCC secretary-general Kenneth Mtata declined to say what the churches discussed with the MDC Alliance leader, but said they were waiting for Chamisa to sign a “document” before going on to the next stage, adding that their focus was to bring the parties to the negotiating table urgently.

Mtata said Zanu PF party officials were aware of their meeting with Chamisa.

“Yes, Zanu PF is willing, but it must be formalised and they are aware of the meeting that we held yesterday (Wednesday). There is likelihood that we may have these dialogues starting soon,” he said without going into detail.

“What we are trying to achieve is that there are key actors in Zimbabwe who must be able to come to negotiate and how we create a future process in which there will be convergence in the way we are thinking post elections.

“The biggest challenge we have is that right now, we don’t have dialogue. The reason why we need dialogue in Zimbabwe is that our politics is poisoned, our people are polarised and even if we use official results, it means that half of the population is for Nelson and half are for ED. It tells you that we are in a country where those two people will need, in a way, to talk to each other on how they provide a common narrative for the nation.”

Mtata said even before elections, the churches had insisted on dialogue among the key political actors.

“We have proposed that at the moment, there are two main actors, that are Zanu PF and the MDC (Alliance). They can pretend as much as they want that they will go for elections and preparing for 2023 and so forth,” he said.

“But we have a deeper challenge of mistrust and lack of recognition of institutions, suspicion that some institutions are captured. So before we even try to imagine resuscitating the economy, we must clear the air. At the moment, someone will be saying ‘Zimbabwe is open for business’, while on the other hand, someone will be saying Zimbabwe is closed for business and that will not move this country forward.”

Mtata refused to shed light on who ZCC was talking to in Zanu PF, citing “sensitivity” of the matter.

After the Wednesday meeting with the clergymen, Chamisa told NewsDay that he was ready for dialogue.

“Even if we are to say we are to confront Zanu PF, after confrontation, there has to be a table. So, it’s better if you are able to get a table sooner than protests in the streets. But if they are not able to listen, we will take the long route until they see the logic and sense of unity, peace and working in a progressive manner.”

He said the people were divided and the country was confronted by many challenges, hence the need for dialogue.

“We need both hands to be able to tackle the magnitude of this problem. One hand will not suffice,” Chamisa said.

Asked about Mnangagwa’s statements that his doors were also open, Chamisa retorted: “If his doors are open, then he must walk out of those doors and locate our doors that are very open. We cannot go to his doors because they are locked. We have looked around and we see that the doors are locked.”

Chamisa said the offer to create the office of the Opposition Leader was totally unacceptable.