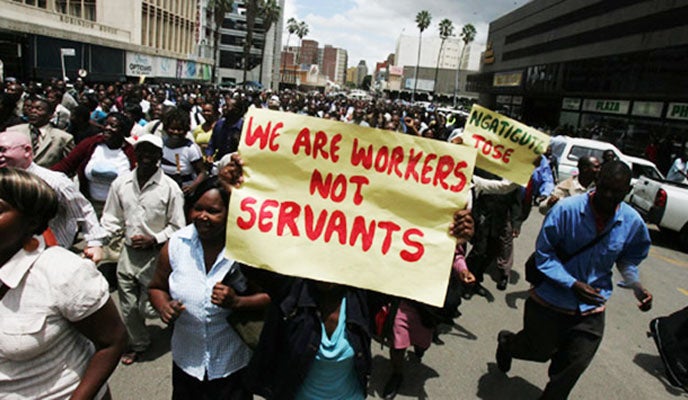 PRESIDENT Emmerson Mnangagwa’s government has been pushed against the wall by its restive workers who have tabled a new salary demand of at least US$475 or its equivalence of $7 267 at the prevailing interbank rate for the least paid civil servant, as inflation continues to gnaw into the local currency and worker’s earnings.

The salary issue it at the centre of today’s crunch meeting between government and workers’ representative body, Apex Council, with workers’ leaders vowing yesterday that they would not settle for anything less than US dollar-benchmarked salaries.

This comes at a time doctors, whose strike enters day 43 today, have been making similar demands to have their salaries pegged at the US dollar interbank rate, a demand Treasury has repeatedly shot down.

“We will stick to our position of US$475 for the October 2018 salary for the lowest-paid worker be multiplied by the interbank rate as is happening with all goods and services,” Apex Council spokesperson David Dzatsunga said ahead of today’s National Joint Negotiating Council meeting.

Government last month offered a 76% salary hike to its workers which they grudgingly accepted, but since the introduction of the Zimdollar in June this year, the economic situation has continued to deteriorate with prices of basic goods skyrocketing, chiefly in response to fuel and electricity price hikes.

Doctors last month rejected a 60% pay hike and have not been reporting for duty citing incapacitation. The Labour Court last week ruled their strike illegal and ordered them to return to work within 48 hours, but in a statement yesterday, the Zimbabwe Hospitals Doctors Association vowed to defy the court order.

“While doctors would want to return to work…they continue to be incapacitated and lack resources to comply with the labour court judgment.”
The doctors also disclosed that only three meetings have been held since they went on strike 42 days ago, casting aspersions on government’s commitment to ending the impasse that has left the public health sector in limbo.

Nurses at various hospitals have failed to report for duty as well, citing incapacitation. Today’s meeting comes as the often divided teachers’ unions are also planning to also meet and plot a joint operation against the Mnangagwa government, a move likely to see the educators downing tools this week.

“We are going to meet today, the NJNC meeting is an attempt to hoodwink the teachers and disrupt the possible unity. Nothing will come out of that meeting. Imagine, the same people (Apex Council) that went to Mnangagwa to request for the return of the Zimdollar now going back to demand US dollar-pegged salaries?”

He added: “We met with Zimta on Wednesday and other unions have asked to be part of the process and we agreed to meet tomorrow (today) to work on modalities of uniting against government over salaries. We have agreed in toto about the urgent need for declaration of national incapacitation,” Zhou said.

“A final meeting would be held tomorrow (today) and thereafter incapacitation may begin. We don’t want a salary increase, but payment of old US dollar-pegged salaries in terms of the current inter-bank rate.”

Rural teachers have already declared a strike starting today, putting pressure on a government that is facing a national shutdown from the Zimbabwe Congress of Trade Unions over the deteriorating economic situation in the country.