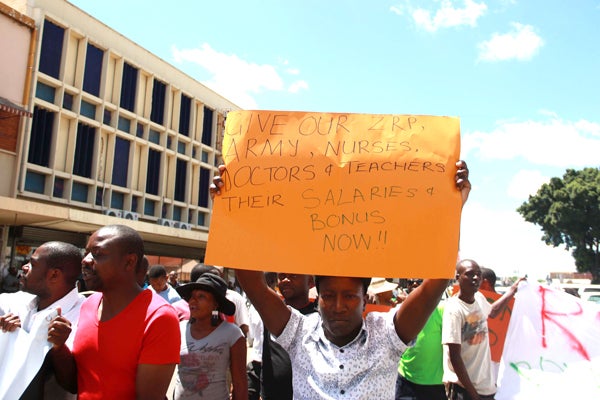 ZIMBABWE’S impoverished civil servants yesterday made a volte-face and embraced a 76% salary adjustment made by their employer, hardly a week after they scoffed at the offer, describing it as falling far too short of their expectations.

Through their representative body, the Apex Council, the government employees said they had provisionally settled for the offer tabled by their employer while negotiations for a better living wage were ongoing.

“Apex and government have signed a provisional salary agreement which will see civil servants receiving a salary increment of between 50 to 76% with effect from August 1, 2019. Negotiations will continue,” Apex Council spokesperson David Dzatsunga said.

The National Joint Negotiating Council also confirmed the development in a statement following the parties’ meeting in Harare.

“A cost of living adjustment ranging from 50% to 76% of the total package (basic salary plus transport allowance plus housing allowance plus special civil service allowance plus representation where applicable) be effected on a sliding scale with effect from August 1, 2019,” part of the statement read.

Government’s 76% pay increase would see the least paid worker earning about $1 023 per month, but the Apex Council had initially said the offer fell far short of the $4 750 minimum wage the civil servants were
demanding.

After last Friday’s meeting, the Apex Council later met its affiliate unions and agreed to take up the government offer while pursuing further salary negotiations.

“The tragedy is that they benefit at the expense of the rest of the civil servants. It is a wake-up call for all civil servants to fight to remove the Apex Council. Teachers will remain incapacitated; I don’t see the third term opening. Examination classes will be affected,” Zhou said.

“The said agreement when prices of goods have gone up by 1 000%, tollgates by 500%, fuel by 1 000%, is the height of madness. It vindicates some of us who have always said the Apex Council is a tool used by government to suppress workers,” he added.

But The Zimbabwe Teachers’ Association said: “The NJNC meeting held today has uncharacteristically signed off the government award after it threatened not to pay if workers refused to sign the award,” Zimta said in a statement.
“Zimta condemns this bad faith tactic that has traits of coercion. We are disappointed by our frontline negotiators who failed to hold fort.”

The salary adjustment came as teachers had threatened a crippling industrial action at the opening of the third term in two weeks’ time, while other civil servants – among them doctors and college lecturers – claimed they were now financially incapacitated to continue reporting for duty.