Crisis in Zimbabwe Coalition, an umbrella body of civil society organisations operating in Zimbabwe, has learnt with concern, the resurgence of xenophobic attacks in South Africa, particularly targeted at Zimbabwean nationals.

Source: CiZC calls for urgent and permanent solution to end xenophobia in South Africa – The Zimbabwean 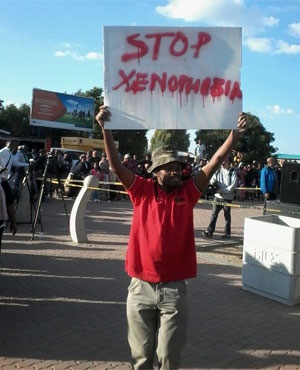 Media reports suggest that “illegal Zimbabwean immigrants” are being systematically targeted and forcefully evicted from their rented homes and market places in areas such as Johannesburg’s Turffontein Township. In videos circulating on social media, the immigrants who are being accused of taking jobs in a country where a third of the workforce is unemployed are being threatened with arson attacks.

Those attempting to enter South Africa from Zimbabwe are being bundled into police trucks for deportation.

Unfortunately, with the 2024 general elections approaching, anti-immigrant sentiments are becoming stronger. The Patriotic Alliance Party leader, Gayton McKenzie has also reportedly deployed teams across the country that are confiscating goods from migrant-owned shops saying 2022 will be the year of the campaign against migrants working in South Africa and the businesses that employ them.

On 16 January 2022, Nhlanhla Lux of ‘Operation Dudula’ and his followers reportedly forcibly removed foreign traders from the Bara taxi rank in Soweto.

Since June 2021, Operation Dudula has engaged in a so-called “clean up campaign”, which seeks to end alleged illegal activities and get rid of immigrants.

Meanwhile, the government of South Africa has given Zimbabweans until December 2022 to apply for work permits and regularize their stay following a decision to end a decade-long moratorium that allowed about 200 000 Zimbabweans to live and work in the country using the Zimbabwean Exemption Permits (ZEP) that were renewable after every four years since 2008.

The Coalition is also concerned about statements attributed to the South African Home Affairs Minister, Aaron Motsoaledi, which clearly reveal his antagonism towards foreigners. Minister Motsoaledi is on record saying:

“People keep blaming the immigration services of South Africa as if when one country creates a crisis, the country closest to it must respond by building the requisite capacity to deal with that crisis. There’s also this belief that South Africa has abundant resources for everybody. That’s nonsense. No country has the capacity to accommodate everyone who has problems in the country they come from. In other words when more and more people come, we must be able to hire more and our resources must expand? That’s not on.”

Such utterances may encourage and condone abuse by the police and army while triggering xenophobia and other systematic human rights abuses.

We therefore make the following submissions: