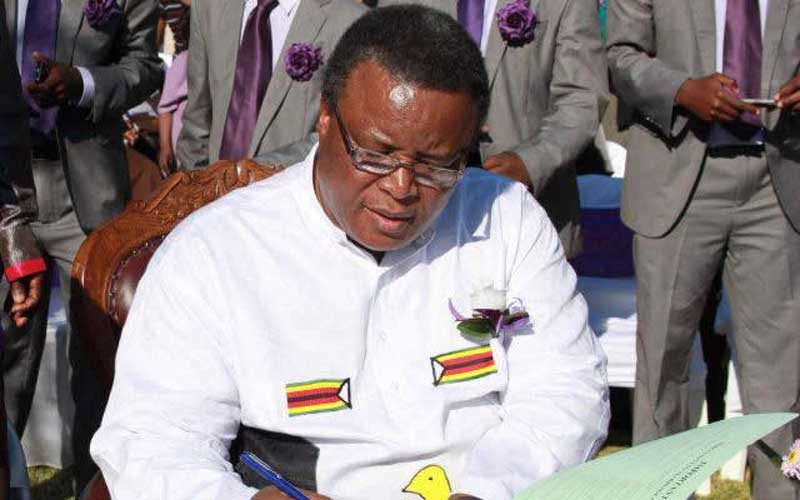 FAMILY of God Church founder and leader Andrew Wutawunashe has compared President Emmerson Mnangagwa to the biblical Joshua and claimed he was “God-sent” at the just-ended war veterans conference held in the capital.

“To continue to stand with our President, and to say to us all clearly, sometimes I wonder if he thinks he is a prophet. Vice-President Constantino Chiwenga keeps telling us this is God’s anointed leader and this is the spirit of Caleb,” Wutawunashe said in his address.

“This is a spirit which has raised the war veterans league. You must fight to uphold the spirit of Caleb as a carport to Joshua our president and we have seen (former VP Kembo) Mohadi through thick and thin he has not left, he has stayed with the President. It is our unity and standing together with our President that is going to push us forward.”

The war veterans conference was officially opened by Mnangagwa on Friday.

It began on Thursday, and ended on Saturday, with the ex-combatants endorsing Mnangagwa as the ruling Zanu PF presidential candidate for the 2023 elections.

“Your Excellency, do not get tired, there still remains much land to be taken. It’s a miracle, I was driving in the morning and I told the people I was with that it took 20 years for the country to just start changing rapidly, that is the spirit of Joshua,” Wutawunashe said.

“It (Zanu PF) was given the responsibility by God so that the people of Zimbabwe prosper. This is the party that was given the DNA for the prosperity of the country … let us rally behind ED.”

Mnangagwa has been visiting various churches in what has been interpreted as part of his 2023 election campaign.

He has been endorsed by some Zanu PF organs such as the youth league to represent the party in the presidential polls, where he will square off with Citizens Coalition for Change interim leader Nelson Chamisa.

Meanwhile, Zanu PF war veterans secretary Douglas Mahiya said they would count on war collaborators to deliver a fatal blow to the opposition in the elections.

“As the war veterans in collaboration with our erstwhile partners during the struggle vanamujibha and chimbwidos, we will yield a formidable combination which will dismantle whatever the enemy has been building,” Mahiya said.