Commonwealth to save Zimbabwe? 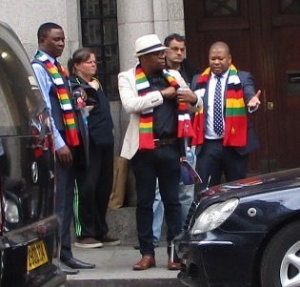 The Commonwealth is reported to have agreed to a rescue mission for Zimbabwe at its meeting in London this week during the visit by Zimbabwe’s Foreign Affairs and International Trade Minister Lieutenant-General Sibusiso Moyo.

The London weekly newsletter Zimbabwe Confidential says Commonwealth countries hosting exiled Zimbabweans have agreed to organize airlifts back to Zimbabwe to allow them to vote in the elections, expected in July or August.

The decision follows General Moyo’s announcement that, although no date has yet been announced for the elections, it was too late to organize voting in the diaspora as Zimbabwe’s diplomatic missions are hardly ever open and staff had not been approved by the Israeli Nikuv company which traditionally arranges Zimbabwe’s elections.

The UK’s ‘fly to vote’ operation is expected to be funded by its foreign aid budget and the new Zimbabwe Airways, apparently connected to the Mugabe family, will provide planes. All travel arrangements are in the hands of Vice-President General Chiwenga’s wife Mary and the diaspora will cast their ballots at a special polling station set up by the military on the Agriculture Rural Development Authority seed farm she recently seized near Harare.

The Vigil has done exhaustive research and is sorry to say that this is all fake news, or what we used to call Herald or ZBC news. We are particularly sorry because this scenario is the only way we can see that the millions of people in the diaspora will be able to exercise their constitutional right to vote and because it reflects our skepticism about the running of the elections.

With only three months or so to go before the polls, the Zimbabwe Election Support Network says it is dismayed at the lack of progress in implementing electoral reforms (see: https://www.dailynews.co.zw/articles/2018/04/19/reforms-delay-jeopardises-polls). And now we learn of an MDC T activist being assaulted  by soldiers and kidnapped in Bindura on Independence Day (see: https://bulawayo24.com/index-id-news-sc-national-byo-133628.html).

We at the Vigil have been busy following General Moyo’s visit to London (see: http://www.zimvigil.co.uk/vigil-news/press-releases/934-zimbabwe-vigil-media-release-19th-april-2018-). As we gathered outside the Embassy today there was an unusual amount of activity at the normally recumbent Embassy and we were told that Moyo was there and that it had been suggested that he should come out and speak to us. He didn’t appear. We questioned those coming out and learned that it was an open meeting for the diaspora but when our activists tried to get in they were turned away. So much for ‘open meeting’. It was open for Zanu PF supporters only.

FOR THE RECORD: 21 signed the register.