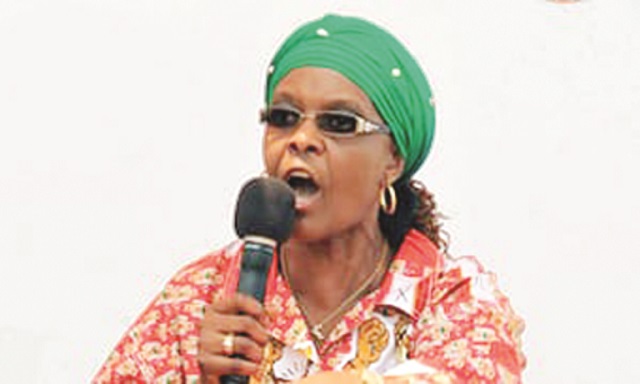 The challenge has been set down for 10-11 May‚ the organisation’s Kallie Kriel said. Grace Mugabe‚ who is accused of assaulting a woman‚ Gabriella Engels and hotel staff in Sandton‚ Johannesburg‚ flew back to Zimbabwe with her husband former President Robert Mugabe‚ in August 2017 without being charged. Their departure followed high-level discussions in South Africa to grant Grace diplomatic immunity after her alleged hotel rampage after she found her sons with the South African model.

Engels‚ who was allegedly struck with an electrical extension cord‚ laid assault charges against her. AfriForum‚ which is assisting Engels in the case‚ said they believe they had a strong case to challenge the immunity. If they win next month‚ they will ask prosecutors to go ahead with the trial. If the National Prosecuting Authority does not take up the case‚ then they will proceed with a private prosecution‚ Kriel told a Press briefing in Centurion.

In her founding affidavit‚ Engels details how she and her friends visited “acquaintances”‚ when Grace “burst into the hotel room and assaulted me in the presence of her (Mugabe’s) bodyguards”. They had visited Mugabe’s sons‚ Chatunga and Robert Jnr.

“She used an electric cord with a plug at the end of it and I was . . . hit over the forehead‚ causing a gash which has serious repercussions for my appearance and my professional career as a model,” Engels said in the affidavit.

Photographs taken by her mother showed a gash on Engels’ forehead. She also had bruising on her thighs.

However, media reports from South Africa said Grace denied assaulting Engels‚ saying an “intoxicated and unhinged” Engels had attacked her with a knife. Grace said she had intervened on behalf of her sons who were “in trouble with a drunken young woman”. In her affidavit‚ Grace dismissed Engels’ version as “malicious allegations” and said she had been attacked.

Meanwhile, the South African National Prosecuting Authority says it is in the process of informing the son of former South African President Jacob Zuma, Duduzane on when he should appear in court to face a charge of culpable homicide.

Last Thursday, the prosecuting body confirmed its decision to prosecute Duduzane after he failed to meet a two-month deadline to make representations. Three years ago, Duduzane’s Porsche collided with a minibus taxi, killing Phumzile Dube, a Zimbabwean national.

The NPA had initially declined to prosecute, leading to AfriForum’s Gerrie Nel announcing in 2017 that the lobby group would seek a private prosecution of Duduzane. The NPA now says it believes it can successfully prosecute Duduzane on charges of culpable homicide. — Times.Live/ewn.co.za/Sunday News Reporter.