Compulsory indoctrination for civil servants on the cards 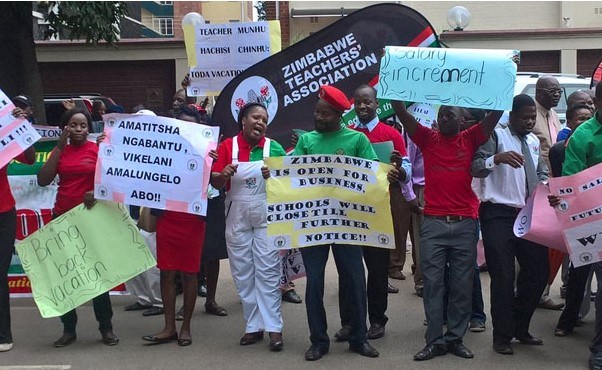 The ruling Zanu PF party wants to force government employees to attend its Herbert Chitepo School of Ideology ahead of the 2023 elections, in a move widely seen as an attempt to brainwash government workers.

In February this year, the party directed that traditional leaders, local government leaders and council employees be forced to attend the school “to create a strong bond between the party and government” in an effort to drum up support ahead of the polls.

Now the party has turned its attention to civil servants, who have not always seen eye-to-eye with their employer.

According to a resolution by the ruling party’s Bulawayo province, which was read out during its inter-district meeting held at Davies Hall at the weekend, Zanu PF also wants students who fail to attain the benchmark five “O” Level

subject passes to be employed in government and be given an opportunity to enrol in tertiary institutions.

“Among other resolutions, the province also called for all civil servants and youths to attend the Chitepo School of Ideology. The province also called for the inclusion of young people who do not have the adequate and requisite five Ordinary Level passes in various educational programmes,” Raymond Mutomba, the party’s provincial secretary for administration, said soon after the closed-door meeting.

During the meeting, which was superintended by politburo member Engelbert Rugeje, the province further recommended that any new party member should remain at cell level for five years before moving to the upper structures of the governing party.

“This is madness of the highest order and cannot be accepted. We are educationists and while we appreciate Chitepo as a liberation icon, we don’t see the need for teachers to go through a party poisoned ideological school,” Progressive Teachers Union of Zimbabwe president Takavafira Zhou said.

“Our teachers are currently demotivated and underpaid and the only motivation they want is for them to get back to the US$520 per month salary they were getting pre-October 2018 nothing else. That is the only language that we can understand not to go through a moribund ideological college for a political party. Teachers have fallen from grace to grass.”

Zimbabwe Confederation of Public Sector Trade Unions secretary-general David Dzatsunga said: “We are yet to get that. In actual fact, we cannot comment on party resolutions as we have a social contract with our employer. We are not into party politics and we only respond to things that come from our employer.”

MDC Alliance Bulawayo provincial spokesperson Swithern Chirowodza described the resolution as unconstitutional and an attempt to create a one-party State.

“This resolution is coming from dead minds speaking from a graveyard of fools. To start with, civil servants constitutionally are supposed to be apolitical. You cannot coerce civil servants to join a political party which is not of their choice. As MDC Alliance, we will definitely resist this move if Zanu PF tries to implement it,” he said.

Zapu described the resolution as “command support for Zanu PF”.

“Even at his worst, (former President Robert) Mugabe never stooped so low like what this regime (has done). Just like the doling out of state-of-the-art vehicles to principals of the discredited Political Actors Dialogue, this again is part of Zanu PF’s grand plan to create a one-party State in the country,” Zapu spokesperson Iphithule Maphosa said.