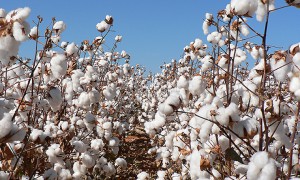 THE 2018 cotton marketing season kicked off with buyers offering last year’s producer price of $0,47 per kilogramme (kg) as they await a government announcement of a new price.

In line with the deliveries, the Reserve Bank of Zimbabwe (RBZ) announced a $40 cash payment for cotton growers for each bale, with the balance being deposited into the grower’s bank account or mobile money wallet.

The arrangement is similar to the tobacco cash payment plan meant to cushion farmers who produce export crops. The RBZ set a $300 daily cash payment ceiling for tobacco growers, with balances paid electronically. Part of the cash for tobacco farmers is in foreign currency.

In a statement, the RBZ said the cash payment was in line with international best practice of promoting use of electronic money.

“In line with international best practices and the need to promote the use of plastic money, cotton growers shall be paid in cash, a maximum of $40 for each bale sold,” it said.
Despite a similar announcement last year, farmers struggled to get the $40 from cotton buyers due to the liquidity crisis.

“We expect a good price from government this year. International lint prices have been stable opposed to the turbulence experienced in the previous years. Government is doing everything possible to incentivise and revitalise all sectors that were withering due to price wars,” Zimbabwe National Farmers Union vice-president Garikai Msika said.

The Cotlook A Index is currently quoting a price of $0,93/pound.
The RBZ also advised producers that they will be paid a 10 percent export incentive.
“Cotton growers shall be paid an export incentive of 10 percent, which shall be paid on a monthly basis through bank accounts or mobile money services. In this regard, cotton merchants shall submit to the reserve bank, the list of growers and their respective account details by the 7th of the month following the one for which the incentive is being claimed,” the RBZ said.

Last year government raised the base price for the crop from $0,40 per kg to $0,47 per kg.
RBZ also urged merchants to secure offshore lines of credit prior to purchasing seed cotton.
“Seed cotton shall continue to be purchased using offshore lines of credit. For avoidance of doubt, only those cotton merchants who were financed by government and those who financed cotton production using their own resources shall buy seed cotton,” the RBZ noted.

Cotton was once one of the country’s largest foreign currency earners before production slumped due to viability challenges resulting from inadequate funding and poor prices.