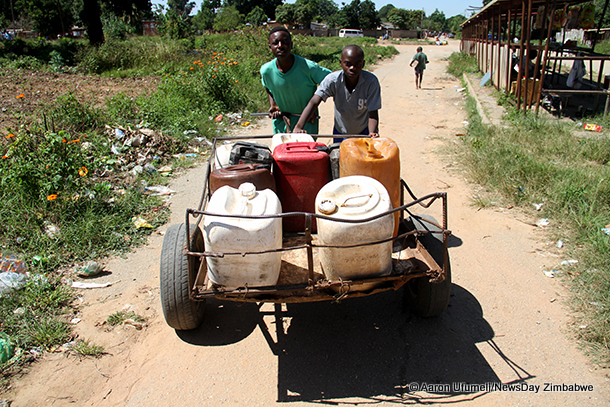 BY PATRICIA SIBANDA
THE Bulawayo Progressive Residents Association (BPRA) has blamed the worsening water problems in the country’s second largest city on mismanagement by the Bulawayo City Council (BCC).

BPRA feels that most decisions made by BCC have negatively affected residents.

Currently, BCC is implementing 48-hour water rationing in the residential areas due to various factors that include dwindling raw water supplies and infrastructure breakdowns at waterworks and plants.

BPRA secretary for administration Thembelani Dube told Southern Eye that although BCC has been blaming natural causes, it has also been adding to the water woes through mismanagement.

“Water scarcity in Bulawayo is real, but it is also a constructed problem. While we appreciate that water is indeed a finite resource that must be managed judiciously, we are of the view that our current council has worsened the crisis as opposed to mitigating it,” Dube said.

“We have been made to believe that scarcity is natural, rather than human-induced. The natural causes of scarcity that are often pushed by the duty bearers at national and local government levels are often quite different from the local residents’ knowledge and lived experiences. Water is a renewable resource and its scarcity should not be permanent, especially when we have instances whereby the region experiences favourable rainfall seasons.”

He urged BCC to come up with measures to ensure the water resources in the city are sustainable.

“BCC water conservation measures are mainly hurting the residents. The industries that do not pay their water debts continue to get water, while residents continue to be penalised. Areas such as Lobengula West, Iminyela, New Magwegwe, Manningdale, Luveve, Nkulumane 12, parts of Mpopoma, Gwabalanda, Robert Sinyoka, Mazwi Village, Methodist Village and Pumula South, among others, usually go for more than five days without receiving water.”

The association added: “BPRA notes with concern that these new developments come on the backdrop of a diarrhoea outbreak in Pumula (wards 17 and 19) and residents fear this might spread to surrounding areas, lest we forget the tragic 2020 Luveve gastrointestinal crisis which led to the loss of more than 20 precious lives. Today these lives remain unaccounted for.”

Deputy mayor Mlandu Ncube told Southern Eye that council hopes that the city’s water crisis would be solved by Monday (yesterday). He said all burst pipes were being fixed.

“First of all, it is not good for BPRA to encourage residents not to pay for water. I am hoping that by the end of the day today (yesterday) the water problems would have been resolved. There is no one who has the intention to see residents spending days without water,” Ncube said, adding that water volumes at Bulawayo reservoirs were currently very low.