LOCAL authorities and private entities have affirmed their support for First Lady Auxillia Mnangagwa’s initiative to rehabilitate children living and working on the streets of major cities and towns.

Officials from these entities were speaking at Chambuta Children’s Home here.

Gweru mayor Josiah Makombe, who is also the president of the Urban Councils Association of Zimbabwe (UCAZ), said towns and cities tried to assist children living and working on the streets and acknowledged that their efforts were not enough.

“You saw that as towns and cities we try to help these children, but it is not enough and you came up with this programme and we are fully behind you,” he said.

“We are supporting you all the way. We want to thank you for this initiative.

“As mayors, we have adopted the children’s houses and we will renovate and furnish them so that they live comfortably like any other children.” 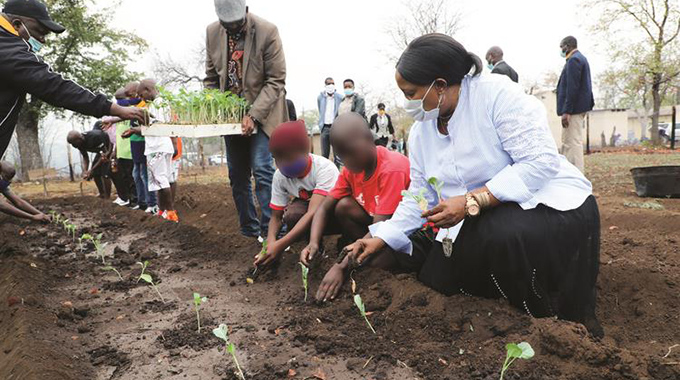 Turning to his fellow mayors, Mr Makombe said: “Let us all fully support the First Lady in this initiative.”

So colourful and all-encompassing was the event on Wednesday as authorities from across the political divide converged at the institution to assess progress and view the work being done by children who formerly lived and worked on the streets who were rounded up and committed there.

Tshangani cultural dances added colour to the event as guests were captivated by elderly women who performed well-choreographed dance routines before a cooking competition for traditional dishes.

Chambuta is a children’s home in the Lowveld where the former street children are being rehabilitated, amid indications by the First Lady that plans were afoot to convert the home into a fully-fledged rehabilitation centre for children living and working on the streets of the country’s major cities to provide them with education and life skills.

Empowerment programmes towards these children are underway, being implemented through training programmes in agriculture, building and motor mechanics supported by Mushagashe Vocational Training Centre.

After one month, they will be provided with a certificate of competence before they are further placed on attachment in their chosen fields.

Speaking during a tour of the institution, the First Lady said it was not for the Government alone to see to it that the needs of the children were catered for, but everyone’s responsibility.

Since her arrival on Tuesday, Amai Mnangagwa is living with the children at the home and having meals with them, getting a personal experience of life at the centre.

Through her Angel of Hope Foundation in partnership with the department of social welfare, she rounded up the children and committed them to Chambuta where they are being equipped with vocational skills and doing school work.

The initiative gives the children a chance to lead better lives in future.

“It is great to be with you here at Chambuta where we have visited the children we took from various places and found them a home to live and study,” said the First Lady.

“As we all know, children living and working on the streets face many challenges because they have no guardian and they are abused willy-nilly, causing hopelessness.”

The First Lady said all children countrywide had rights to food, clothing, education, parental and guardian support and protection.

She said lack of shelter was a violation of the children’s rights, hence the decision to find a home for them.

Angel of Hope Foundation, she said, has been working with the Ministry of Public Service, Labour and Social Welfare, City of Harare and other stakeholders holding meetings on where to shelter the children.

“We saw it fit to bring the Children to Chambuta Children’s Home in Chiredzi District where the children can get vocational skills and education at one place and living as a family,” said the First Lady.

“We want Chambuta to become a rehabilitation centre for children living and working on the streets of cities and towns across the whole country. As you can see, we are still working on the place. Electricity and water are being fixed as we seek to narrow the gap between these children and those at home.”

The First Lady was thankful to various stakeholders for their commitment to transform the lives of children at the centre.

“I discovered that these children have dreams to make it in life,” she said.

“It is up to us as parents and representatives to capacitate these children so that they can have a brighter future. It would be sad to let these children grow and die on the streets with nothing tangible.

“It is not the work of the Government alone, but all citizens have a role to play, especially in this Covid-19 era where people living on the streets have no personal protective equipment.”

The First Lady thanked the leadership of Masvingo for working together in ensuring better living conditions for the children at the centre.

Earlier, the First Lady started by touring various projects being done by the children at the centre before proceeding to the garden where she participated in planting vegetables.

She also appreciated the goat rearing project at the centre and toured the facility’s buildings that were then adopted by various cities in support of her initiative and will renovate and furnish them.

After a tour of the facility, it was now time for the First Lady to meet the Chambuta community. She got a rousing welcome from elderly Tshangani women who were resplendent in their colourful cultural regalia called Xibhabela and deftly performing Tikomba/mbeulani dance routines much to the delight of the gathering.

Masvingo Provincial Affairs Minister Ezra Chadzamira was awestruck by the projects which the First Lady has initiated at the centre.

He praised her for staying with the children at the centre, saying it was a sign of motherly care and love.

“We are grateful Amai for gathering us here for a good cause to witness the great works you are doing,” he said. “This is commendable. Mayors and town clerks from various cities and towns are here. Regardless of political affiliation you have gathered us here for the betterment of our country. Amai, you have been doing a lot for this province and the whole country.

“Today we are here because of the initiative that you started through your foundation. You took these children from the streets and now they are attending school, while others are being equipped with vocational skills.

“Some of us might be staying in hotels, but with you it’s a different scenario, you chose to stay and eat from the same plate with your children at the centre. This initiative is a first of its kind Amai.”

Minister Chadzamira said Zimbabwe was moving forward because of the First Lady’s works.

The First Lady is running a nationwide feeding programme targeting children across the country’s provinces to ensure they get access to nutritious food to grow healthy.

The First Lady, Minister Chadzamira, Minister Larry Mavima and all mayors came together, ate the food and were the judges.

The women walked away with prizes.

So committed is the First Lady to address the needs of these children at Chambuta that on a cold Tuesday night in a rare special moment, she gathered around a fire with them giving them warmth that erased every bad memory they had of their previous lives when they survived the jungle of the streets.

The children expressed gratitude to Amai Mnangagwa for giving them an opportunity to improve their lives.