SEVEN months after their lives were stuck in the Covid-19 induced lockdown, a number of pupils from Lupote Secondary School in Dete have become expecting mothers, a situation which has left the community’s leaders concerned. 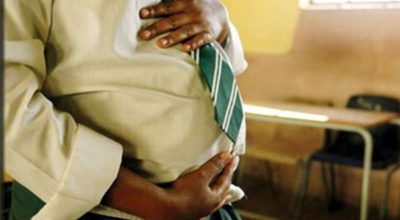 Statistics gathered by the Women Coalition of Zimbabwe’s Hwange chapter revealed that more than 19 pupils ranging from 15 to 18 years of age from Dete got pregnant during the nationwide lockdown.

Sekani Shoko (not her real name), a Form 3 pupil at Lupote Secondary School, said her parents told her that the economic situation had made it difficult for them to continue paying her school fees.

“My father told me that he would not pay my school fees for my secondary education,” Shoko said.

“ He told me that I should start looking for work and get married to sustain the family.”

Sekani said she was willing to further her education, but her father decided to consider paying school fees for her brother, a Form 2 learner.

Her predicament is also being faced by a number of girls of her age in the district, primarily due to the economic hardships induced by the impact of Covid-19.

Catherine Madondo, the chairperson of the Women Coalition of Zimbabwe’s Hwange chapter, said economic hardships coupled with redundancy among adolescents during the Covid-19 nationwide lockdown had played a major role in teenage pregnancy in this part of the district.

“The teenagers had nothing to do, hence indulging in sexual activities, most of these girls may be victims of ignorance leading to teenage pregnancy,” Madondo said.

“In most instances, these girls were lured by men who promised them food and money.

“The financial constraints, which resulted from the travel restrictions and loss of livelihoods forced most young girls in rural Hwange to fall into the trap of teenage pregnancy.”

Despite increasing international recognition that the education of girls is one of the most powerful tools for progress, girls in rural communities suffer when it comes to getting education and whenever there is an economic meltdown.

“Educated girls are more likely to have better income, marry later, and have fewer and healthier children and stronger decision-making power within the household.

“They are also more likely to ensure that their own children are educated.”

According to Lloyd Dembure, the SAFAids programmes officer, the economic challenges have led to the increase of teenage pregnancies and early marriages in Hwange’s rural communities.

“We have tracked a number of cases in Hwange rural where minors are being impregnated by older people,” he says.

Buwalo Mutiliko Trust (BMT), an NGO which deals with sexual and reproductive health among the youths, says teenage pregnancy in rural areas is becoming serious and most of the cases are linked to the hunger for economic support.

“The courts, police and the hospitals are flooded with such cases. As BMT we track all such cases in communities and advocate for justice to be served,” said BMT director Anna Mandizha Ncube.

According to the Ministry of Primary and Secondary Education, 12,5% of the country’s roughly 57 500 school dropouts stopped attending classes due to pregnancy or marriage — almost all of them were girls.

Zimbabwe has made strides in attempts to mainstream gender issues in all sectors in order to eliminate economic, social and cultural practices that impede equality and equity of sexes. However, the pandemic has negatively impacted some of these gains.

l This article was originally published by The Citizen Bulletin, a hyperlocal news outlet covering Covid-19 in Matabeleland.