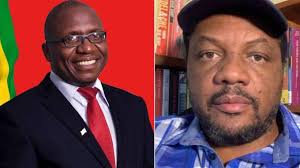 The Zimbabwe Republic Police have since released a statement confirming Chin’ono’s arrest. Hopewell and Ngarivhume have been charged with allegations of Contravening Section 187 (1) (a) as read with section 37 (1) (a) of the Criminal Law [Cordification and Reform] Act, Chapter 9:23, “incitement to participate in public violence’’.

We are concerned about the human rights situation in Zimbabwe and we urge the government of Zimbabwe to stop the arrests and persecution of journalists and activists exercising their constitutional rights.

The barbaric actions of the state security agents is a clear violation of the constitution and have no place in a democratic society.

We thus reiterate our call to regional bodies like SADC and the African Union to intervene meaningfully with a sustainable solution for Zimbabwe.

The Zimbabwean government continues to undermine every effort that brings about reform to bring the country back to a democratic path and a chance to rebuild.