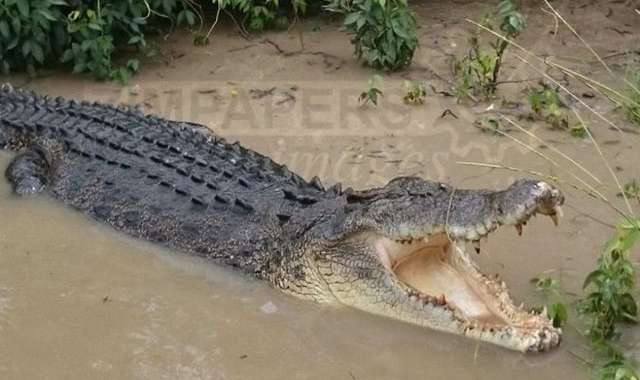 Crime Reporter
At least 30 people were killed by crocodiles in separate incidents countrywide since last year, while more than seven others were seriously injured. According to official statistics, of the 30 people, 25 were killed last year, while five lives were claimed since the beginning of the year.

“Last year only, we received a total of 58 cases of crocodile attacks and we attended to 54 of these cases,” he said. “We however managed to eliminate about 28 crocodiles.”

Mr Farawo said most of the cases involved crocodiles that had encroached into communities.
Last year, he said, 18 cattle, four donkeys and 25 goats were also attacked and killed by crocodiles in separate incidents.
“We would want to urge people to alert us if they have any problems that involve crocodiles,” said Mr Farawo. “They must also stay away from water bodies as they risk being attacked and killed.”

Last month, a Harare woman was killed by a crocodile while trying to cross a stream in Budiriro in suburb.
Ms Tsitsi Jambaya, who was in the company of her neighbour, met her fate when she tried to cross a stream to fetch firewood.
Between January and July last year 22 people were also injured during attacks by animals in separate incidents.

Five were attacked by crocodiles, three by hippos, six by buffalo, seven by leopards, while the other one was killed by a lion.
During the period under review, Zimparks received a total of 243 cases involving human-wildlife conflict and managed to attend to 219.

Lions were responsible for most of the attacks at 59, followed by hippos (44), elephants (41), crocodiles (37), buffalo (35), hyenas (nine), zebras (eight), leopards (six), snakes (two), while bush pigs and baboons were each responsible for one attack.
A total of 109 cattle were killed by wild animals, including nine donkeys and 95 goats.