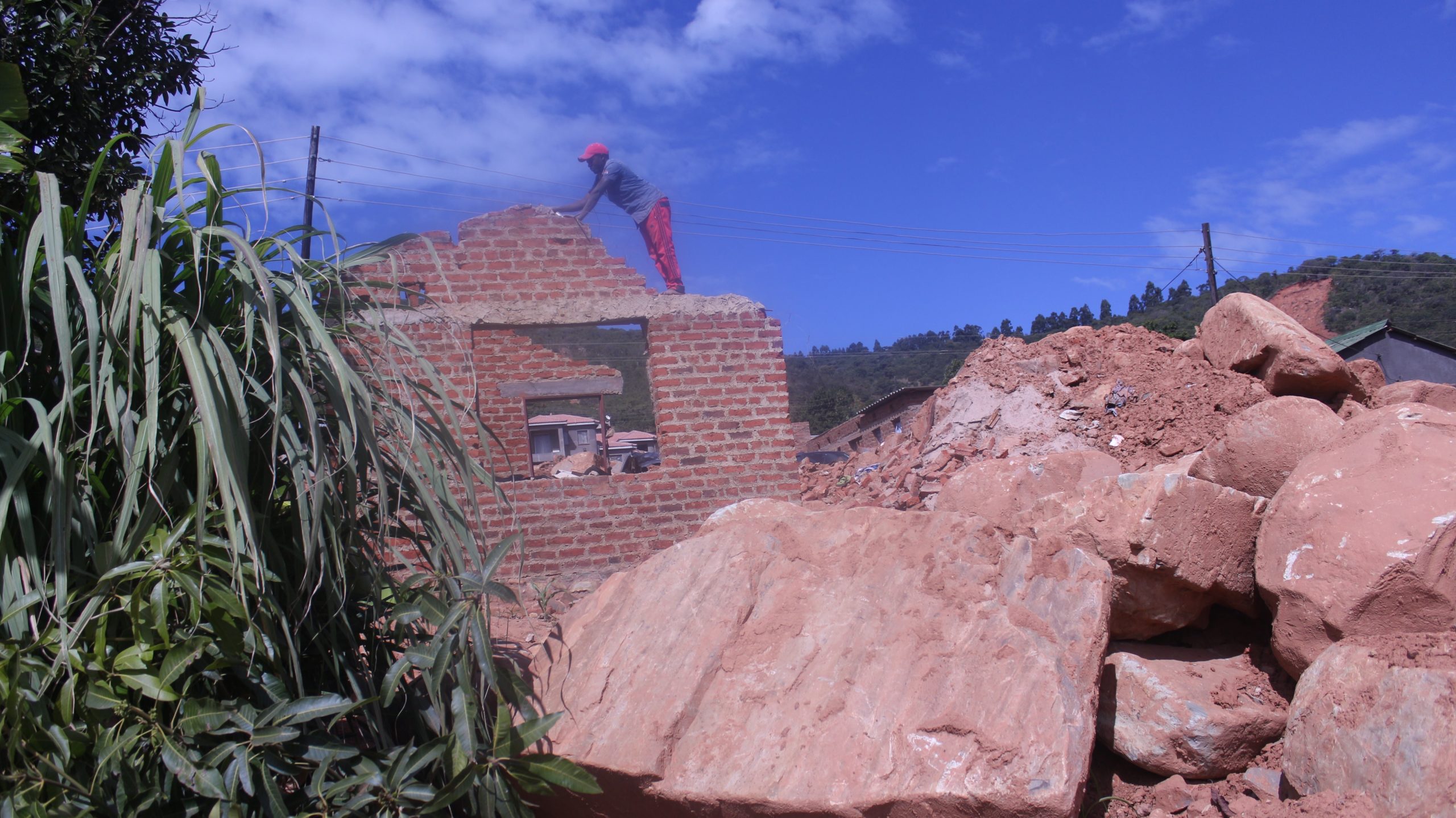 A year after Cyclone Idai ripped through eastern Zimbabwe, Tsitsi Mungana (65), popularly known as Mbuya Chovha in the Skyline area, is still traumatised.

The two graves about a stone’s throw from her house, reminds her of how she became a widow on March 15 last year.

“I was not at home when disaster struck. I was told that my husband and grandchild were missing after our house was destroyed,” Mungana said.

“The body of my grandchild was found seven days later. Unfortunately, they were both buried in my absence.”

Mungana has since erected a makeshift house made of mud and stones as she waits for a miracle for her to get a decent house.

The makeshift house is situated just a few metres from the one that was destroyed by the floods.

“I pray that one day I will have a decent house,” she said. “World Vision gave me some roofing sheets.

“However, they came back and took them away, saying they had given me the wrong sizes. I am still waiting for the sheets.”

Mungana is one of the thousands of people still smarting from the effects of Cylcone Idai exactly a year after disaster struck in Manicaland and some parts of Masvingo.

Thousands of people died and some bodies were washed away into Mozambique after torrential rains caused flooding and mudslides.

Houses and infrastructure were destroyed with Chimanimani being the hardest hit.

Driving to Chimanimani via the Wengezi route today can be deceiving to many. The first two rehabilitated bridges near Nedziwa can be misleading to those without knowledge of what lies ahead.

But the sad reality is at St Charles Lwanga Secondary School. The signs are visible for everyone to see.

The school has lost its glitter following the disaster, which saw buildings being destroyed and children being forced to go back home before the term was over.

It is at this learning institution where two pupils died after a mudslide tore into the boys’ hostels claiming their lives and injuring some.

Today, it has turned into an ordinary school without boarding facilities, which had in the past attracted parents from across the country to send their children to St Charles Lwanga.

A visit to the school on Friday painted a gloomy picture where rubble from the destroyed boys’ hostel and dining hall is yet to be removed.

Inside the hostels there were various items like clothes hangers, abandoned school trunks and broken bunk beds.

“We plead with the school authorities to consider clearing the rubble as it constantly reminds us of what transpired and how we lost our colleagues.

“It is a bad sight for all of us,” said Blessed, a Form 4 pupil who was tasked to show journalists from The Standard the damage that is still visible at the school.

This year the school opened its doors to both boys and girls and has an enrolment of 147 pupils.

“We all wanted it to be a boarding school as before, but it is now only for day scholars.

“The school is mulling reconstructing at another site in Nedziwa.

“We attended the ground-breaking ceremony sometime back, but construction is yet to commence.”

At Ngangu township where houses were destroyed by the cyclone, victims are still waiting for government to deliver on its promise to construct new houses for them.

A visit to one of the three camps, which still houses displaced residents, revealed that victims of the cyclone had lost hope of being relocated to Nedziwa growth point, about 50km away from Ngangu.

“It is not easy to stay in a tent for a long time. During the summer it is hot inside and in winter, the tents are too cold.

“We are tired of lies by the authorities, who are taking long to relocate us.

“We were given some stand numbers and that is it. Some have left the camps and are renting out the tents to desperate home seekers,” said a woman at the camp.

Most of the victims, who spoke to this paper, revealed that they were still traumatised by the March 15 disaster.

According to the Zimbabwe Idai Recovery Project (ZIRP), the rehabilitation of damaged infrastructure and reconstruction of damaged homes will cost between US$548 million and US$622 million.

Over 50 000 households were destroyed, directly affecting 270 000 people, including 60 000 who were forced out of their homesteads and farmland.

The World Bank has since provided a US$72 million grant funding to the ZIRP to reach out to the most affected communities across nine districts.

As time moves, Mungana is not contemplating leaving her small house despite fears of similar natural disasters occurring in future.

For her, being close to the graves of her most loved ones is all that she needs.

Meanwhile, millions of people are still struggling to rebuild their lives a year after Cyclone Idai hit Mozambique, Zimbabwe and Malawi in one of southern Africa’s worst ever weather-related disasters, aid groups said last week.

In a new report ahead of today’s anniversary, Oxfam said more than 100 000 remain in makeshift shelters and destroyed or damaged homes across the region; some roads, water supplies and schools are still in tatters; and nearly 10 million people are “in desperate need of food”.

“The people of Mozambique, Zimbabwe and Malawi are trying to piece their lives back together in the face of huge challenges,” said Nellie Nyang’wa, Oxfam’s regional director for southern Africa.

“Politicians in the region, and across the globe, need to match their commitment.”

Drought conditions in the region have impacted people’s recovery – as have the torrential rain and flash floods that have struck Mozambique in recent months, destroying cropland.

— Additional reporting by The New Humanitarian