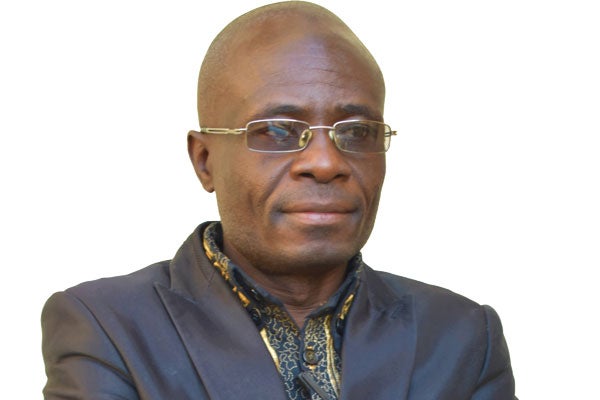 Police officer Saul Utete (pictured) is calling for women to appreciate and recognise their value in society before they expect men to respect them. He bares it all in his anthology titled Reading Printout from the Invisible where he tackles pressing issues affecting both the young and elderly people in African society.

Utete is also a reputable fingerprint expert under the Ministry of Home Affairs in the Zimbabwe Republic Police CID Department. His love for writing started in 1990 and his writing style is inspired by Chinua Achebe and Ngũgĩ wa Thiong’o. He writes about anything or anyone, it could be politics, social life or economics. In this regard, he gives clarity to particular poems in the anthology specifically dedicated to women.

In the poem titled Girl Child, Utete questions the negligence of morals in the modern times. He is deeply concerned at the rate at which young women are used for sexual immorality and as a source of attracting attention. Utete is curious to know why young women allow men to publish their nudity publicly. He gives reference to strip clubs, music videos, modelling shows and certain private parties where girl children dance naked in exchange of money. Concerning sexual immorality, Utete suggests that if people feel like indulging they need to protect their dignity by at least finding a building to go to, somewhere far from the public eye.

“I wrote the poem while walking from work going home. On my way I pass through a bushy area where people indulge in vehicles and under trees,” said Utete.

“When I see women indulging in public I’m like ‘girl child why are you easily taken and left, why? You are a sacred human being whose body is not just to be exposed anyhow’.

“Yes, some are hiding behind that during the Iron Age we were moving naked, but we are past that time.

“We are in current times where decency counts, we move clothed, may we cover up those private parts?

“When I was writing, I was trying to say girl child don’t just let yourself loose, protect your dignity, there is more to you, preserve yourself.

“If one is to say ‘let’s go under a tree, meaning to say you are being devalued, what value do you have? Why do you let people strip you off your value?’”

Utete applauds the present day generation for having regard towards young and elderly women unlike in the past. He challenges the girl child to complement the efforts being put by the government and civil society to appreciate her.

“Now that girl child you have been given a chance, everyone is crying for you to be somebody,” he said.

“What are we doing as girl children? So many prominent women are being known for making money through showing their private parts, but what is that to the world?

“We are devaluing our mothers. Is there no other way to be doing some activities that will go with decency and dignity of your characters?

“Girl child, sit down look at yourself, see what you want to be, your vision and mission in life. Remember you are sacred and of great value.”

After experiencing one of the most disheartening incidents in his family, Utete put his emotions into writing in the poem titled My Sister.

The shattering poem is clearly dedicated to a close family member who was infected with HIV. It is an encouragement to her not to mind what is in her body for flesh will rot with time, but her spirit is just as pure as it was from the day she was born.

“In the poem I was trying to console my sister to mould and nurture her spirit not to think and ponder about the disease in her system,” Utete said.

“I was urging her to look into the future, have love and forgive whoever infected her.”

The poem titled African Woman is in praise of every woman of African origin. Utete urges women to enrich their dignity such that society has mothers who nurture and give proper guidance in terms of how children should behave and carry themselves with dignity. He encourages women to portray decency arguing that for a state to be habitable it should have attributes found in a woman which are peace, love, and compassion.

“A woman encompasses everything and tries her best to give it all in whatever circumstance,” Utete said.

“Looking at every mother, I have so much respect for women to the extent that I told myself that I will never put my hand on a woman no matter how much she wrongs me because she is of value.

“I bestow honour to African women, to say mothers you are not just women, but you are mothers to continents. You are a ‘she’ representing a mother who carries a human life for nine months, thereafter nurture it until the human form is taken back to the soil.”

Topical issues concerning gender equality and women rights have been trending for a while worldwide. The world knows that somehow the girl child has been deprived of certain privileges, independence and status in their life. Calls by civil society and women for the government to enforce policies and laws that protect and empower girl children are loud and clear. Awareness has been raised — it is up to the young and elderly women to entirely engage.

l Grant Moyo is a prolific writer, innovative media personality, entrepreneur and a creative artist who is passionate about using his creative mind for the betterment of society. Follow him on Twitter: @TotemGrant