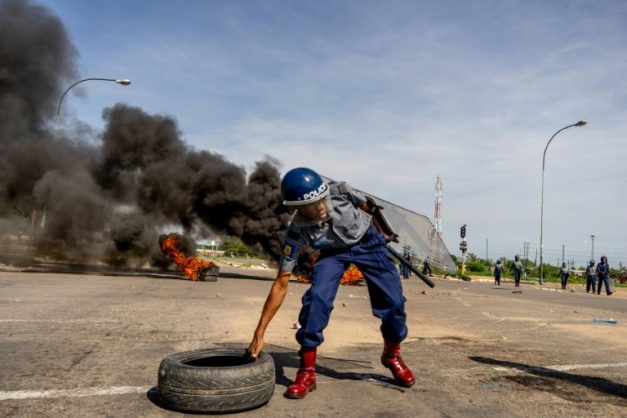 Maimane said the president was wrong to focus solely on the economic situation in the neighbouring country.

The Democratic Alliance (DA) said on Thursday President Cyril Ramaphosa must disclose how he planned to intervene in stopping what it called ongoing human rights violations by neighbouring Zimbabwe’s government against its people.

DA leader Mmusi Maimane said the party would approach the International Criminal Court (ICC) to request a preliminary investigation if Ramaphosa did not announce an immediate plan of action by Friday, abandoning South Africa’s much criticised so-called “quiet diplomacy” on Zimbabwe.

Rights groups and lawyers say Zimbabwe police and soldiers have killed at least 12 people and injured and arrested hundreds of others in a crackdown after protests last week against a steep fuel price increase turned violent, with many shops vandalised and looted in major cities.

Earlier this week, the DA wrote to Ramaphosa, calling on him to intervene directly on the Zimbabwe crisis.

“The president must advise the nation on what immediate steps his government will take to ensure an end to the violence in Zimbabwe and the full reinstatement of all civil liberties,” Maimane said on Thursday.

“To date, Ramaphosa has simply called for the end to sanctions against Zimbabwe. There has been no advocacy for the citizens, justice for the deceased, or protection of civil liberties for those who are still detained.”

He said Ramaphosa was wrong to focus solely on the economic situation in Zimbabwe whilst turning a blind eye to the “dictator-like military clampdown on citizens”.

“If Ramaphosa fails to intervene and stop the human rights abuses in Zimbabwe, he will need to answer to the ICC as to why his government failed to act to put a stop to these grave human rights violations,” Maimane added.

He said the presidency’s response to the DA letter that Ramaphosa was away attending the World Economic Forum in Davos was unacceptable.

“Our country’s duty to protect and promote basic human rights for fellow human beings cannot be put on hold. There is nothing stopping the president from picking up the phone and doing the right thing.”

Zimbabwean President Emmerson Mnangagwa, who visited Russia, Belarus, Azerbaijan, and Kazakhstan last week, was forced to abort his Davos attendance this week to return home in the face of the crisis there.

On Tuesday he promised to investigate the conduct of security against citizens during the protests. Posting on his official Twitter account, Mnangagwa said the violence by the security forces was “unacceptable and a betrayal of the new Zimbabwe”.

“Misconduct will be investigated. If required, heads will roll,” wrote Mnangagwa, who also called for dialogue with churches, civil society, and the opposition.