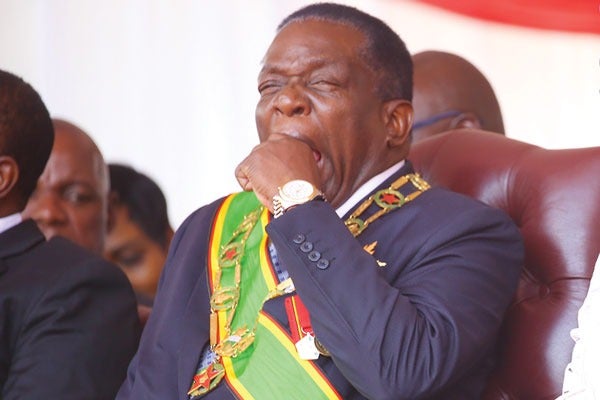 BY TATIRA ZWINOIRA AT THE UNITED NATIONS IN NEW YORK

THE opposition MDC will submit a petition to the United Nations (UN) and international community asking them to designate President Emmerson Mnangagwa and his Zanu PF party as terrorists for the killings of civilians during public protests.

Speaking to NewsDay during a protest of about 50 people against the Mnangagwa-led government that went well into the night on Saturday outside the UN headquarters in New York, MDC Northern America provincial chairperson Tawanda Dzvokoro said the petition had garnered over 3 000 signatures of Zimbabweans based in that country.

“We don’t only demonstrate, but we also write petitions. Right now, we have a petition that has been signed by over

3 000 Zimbabweans that we are going to send to the United Nations and to other organisations as well. Sometimes they respond, but what we know is that they take note,” Dzvokoro said.

Efforts to reach Zimbabwe’s UN permanent representative Frederick Shava for comment were futile as no one answered calls made to the mission.

Zimbabwe is enduring its worst economic crisis in a decade marked by shortages of hard currency, fuel, rolling power cuts of up to 20 hours a day and soaring inflation, which has rendered salaries and savings worthless, fuelling public anger against Mnangagwa’s government.

Dzvokoro said the petition was because of the killing of civilians during the 2018 post-elections violence and during the protests over the hiking of fuel prices in January this year.

Six civilians were killed and dozens were injured after the army fired live ammunition during protests over delays in announcing presidential elections on August 1 last year, according to a commission of inquiry appointed by Mnangagwa.

The 150% fuel price hike in January triggered violent protests, with 17 people killed when the army clamped down on the unrest.

“We are going to continue to demonstrate, write petitions and mobilise Zimbabweans, even on social media so that Zimbabweans speak out against the atrocities that are going on in Zimbabwe,” Dzvokoro said.

He said that they were also building a case on indicting Mnangagwa on charges of gross human rights violations at the International Criminal Court.

Over the past few months, there has been an increase in abductions of civil society leaders, artistes and opposition members by suspected State security agents.

Since January, there have been more than 50 reports of civil society, labour and opposition leaders being abducted in Zimbabwe.
Mnangagwa has questioned the alleged abductions.

“While we are happy that a staffer at a local hospital, who had been reported missing, has now been found unharmed, government is disturbed by the growing trend of politically-motivated false abductions in the country which are calculated to put government in negative light,” Mnangagwa said last week after the Zimbabwe Hospital Doctors Association acting president Peter Magomeyi was found in Nyabira, about 30km north-west of the capital, on Friday last week. He had been missing since the previous Saturday.

Mnangagwa will attend the UN General Assembly with several ministers.

Meanwhile, around 50 Zanu PF supporters held a counter protest at the UN headquarters against sanctions imposed on Zimbabwe by the United States.

The two sides demonstrated side by side peacefully.