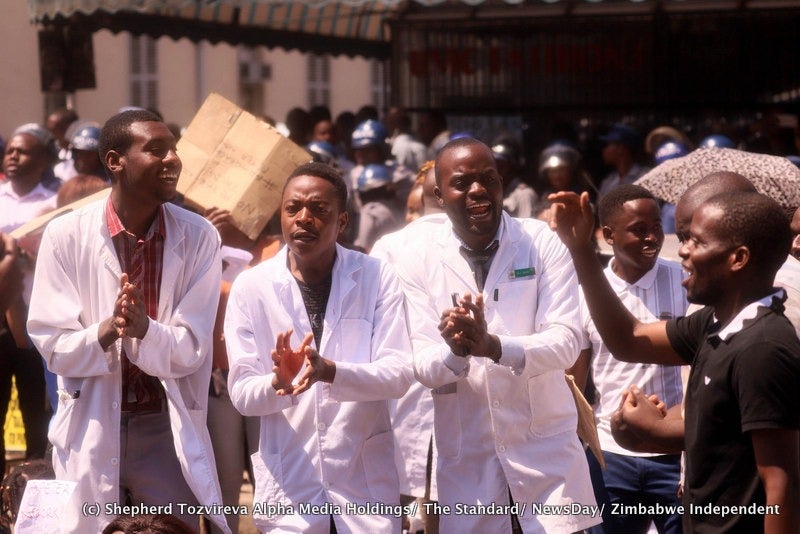 Doctors who are continuing to strike over poor wages despite the return of Peter Magombeyi, their union leader who was allegedly abducted by suspected State agents are calling for a new negotiating forum to address their grievances.

Acting secretary-general of the Zimbabwe Hospital Doctors Association, Tawanda Zvakada on Saturday said they were not on strike, but members had become incapacitated to report for duty.

“The return of Dr Magombeyi does not address the incapacitation and destitution that doctors are currently facing nationwide. Fortunately, it paves way for some serious and meaningful negotiations to start taking place,” he said in statement.

The doctors said the mood was now ready for dialogue with the employer, but are demanding a new forum.

“We feel that the current negotiation forum (Health Apex) does not satisfactorily address our concerns as doctors. We feel a different forum all together should be set up to address concerns,” Zvakada said.

“We are very cognisant of the fact that innocent lives are lost when such industrial actions happen, which are brought about by negligence on behalf of the employer to attend to genuine concerns and challenges doctors face.”

The doctors said they do not draw any pleasure from withdrawing services, but the employer had left them without any option.

“We do not believe that threatening and covering up the situation in the hospitals is the right way to address to our challenges. We are aware of the economic hardship we are undergoing as a nation at the moment,” ZHDA said in a statement.

The body called on government to come up with long-lasting solutions that are enticing to the healthcare workers to halt the current brain drain.

The situation in most public hospitals remains dire as the skeleton staff battles to serve patients.

Meanwhile, Magombeyi, who was abducted and later found wandering in Nyabira, is said to be doing fine, but there are still comprehensive medical tests to be carried out to determine the extent of his injuries.

Magombeyi went missing on September 14 around 10pm. He was found five days later by police in Nyabira. He is currently admitted at a private clinic in the capital.

The public has been urged to desist from spreading falsified information and to wait and give room for the police, medical team and lawyers to comprehensively investigate the matter and bring culprits to book.

“The family is very grateful for the support you have shown them in the past week,” a member of the medical fraternity said on condition of anonymity.