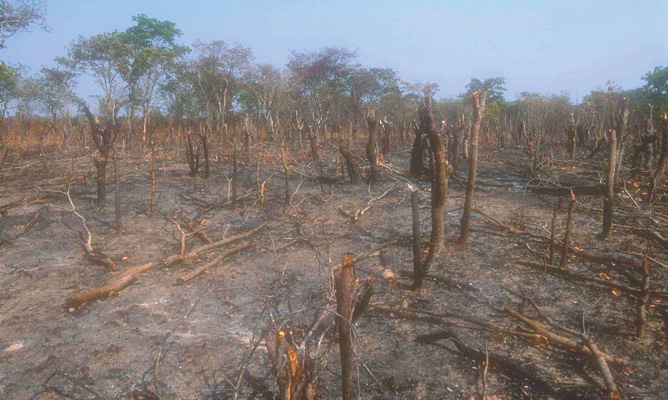 PRECENT report by the Matabeleland Institute for Human Rights (MIRH) has exposed rampant deforestation at the Mazwi Nature Reserve, Khami River Basin by the Khami Prison community leading to calls for urgent intervention to stop the vice.

MIHR blamed the Khami Prisons community for causing massive deforestation in the area by cutting down trees for firewood.

“The MIHR recommends that responsible authorities must stop this environmental carnage. Environmental restorative justice must be implemented. Zimbabwe should establish an environmental court to curb the vice,” the report read.

“On August 1, MIHR received a complaint from St Peters residents in ward 17 that Khami Prison officials and inmates were chopping down trees for firewood.

“On August 13 and 14, the MIHR team witnessed first-hand acts of deforestation by the Khami Prison officials and inmates in the Mazwi Nature Reserve area,” the report added.

“On August 13, our team saw a group of inmates accompanied by prison officials chopping trees. The team saw a Khami Prison tractor with a trailer moving towards the deforesting team. The tractor’s plate number was ZPS021P.”

“On August 14, the team met eight prison inmates accompanied by three prison guards coming from deforesting the area carrying axes.   The scale of deforestation within the Mazwi Nature Reserve risks the extinction of a variety of fauna. This habit was also observed on the other side of Khami Prison on the banks of Khami River.”

MIHR said a variety of trees, which include mopani, marula, umkhaya, mangwe, were being targeted.

MIHR recommended that Khami Prison community be stopped from destroying forests, adding that the correctional facility should be encouraged to use alternative sources of power.

Bulawayo and Umguza Forestry Commission conservator Bekithemba Ngwenya said they would send a team to probe the issue.

“We have received the report so we will be going there to investigate and take appropriate action. We have a nationwide firewood poachers’ raid programme. We will engage the authorities at Khami Prison,” Ngwenya said.

Bulawayo Zimbabwe Prisons and Correctional Services spokesperson Garainashe Moyo said he was not aware of the issue.