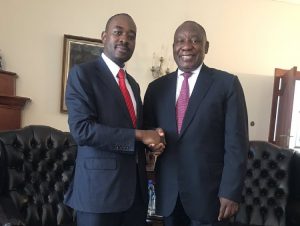 The fact that the polls were presided over by a compromised electoral commission and were characterised by a number of irregularities and that the opposition disputed the outcome of the elections resulted in a legitimacy crisis on the part of President Emmerson Mnangagwa and his Zanu PF party.

In as much as the ruling party has often declared that they were overwhelmingly voted into power, the legitimacy crisis is a reality that has also come with negative implications on economic development as well as democracy.

After the discredited elections, Zimbabwe’s economy has been on a continuous downward trend characterised by foreign currency shortages, fuel shortages and price hikes that have relegated the majority into abject poverty while cash shortages continue to persist.

Given the current environment obtaining in Zimbabwe, economic revival and engagement with the International community remains a pipe dream while investors have developed a wait and see attitude.

Job actions in the public service have also worsened the rot in the country and events currently obtaining on the ground point out that the situation could worsen further.

CIZC is concerned that the government’s response to protests by civil servants and ordinary citizens has been brutal and in some instances, the government has labelled genuine actions by suffering Zimbabweans as ‘regime change protests’.

We remain concerned that in the current context, the ruling party Zanu PF has shown an obsession with power rather than the need to address the continued crisis in the country.

Zimbabwe’s situation requires that political leaders put people first and CIZC reiterates calls for a national dialogue to address the multifaceted crisis in the country.

Resolving the political crisis prevailing in Zimbabwe through multi-stakeholder political dialogue is key in rescucitating the economy and engaging with the international community.