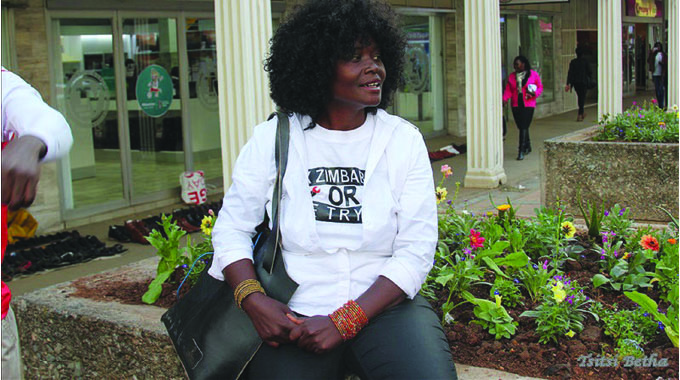 Tsitsi Ndabambi
Over the years we have witnessed our relatives who live abroad come back home pulling large suitcases slaying the latest fashion that would have not reached these parts of the world only to return to their adopted countries when they run out of their resources or when reality calls them back to their slave yards depending on what they are doing there.

Among them are some who are on a mission to make an impact in their motherland although those are the exception nit the rule. Many want to just show off their beauty and leave.

But one who wants to leave a touch of beauty is Savanna Madamombe who is spotted every day by passers-by with dirt in her hands along First Street in Harare.

Curiosity drew us all to approach her and find out what she was up to.

“I came back to spend time with my dad only to watch him die in a week and as I went searching for places I spent time with him as a child to reconnect with him for example the places he took me to buy me a blue dress and red shoes for Christmas when I was 12 years old on Manica Road now Robert Mugabe Road, the place was unrecognisable.”

“I was surrounded by pain and brokenness. I walked to First Street to find Wimpy where he used to take me to eat fish and chips was gone I was met with neglect, abandonment, brokenness and poverty and a stench so powerful I could only walk away,” she said visibly broken.

“My dad was a man of action, he would tell you to fix it by all means necessary,” she added. And fix it she decided to do.

This alone ignited her thinking bulb and she cooked up a plan to play a part as a responsible citizen, something that would make her dad smile proudly in heaven.

On June 21, wearing her T-shirt written ‘‘Fix Zimbabwe or Die Trying’’ she dragged her sister Christina to the flower nursery where she purchased a truckload of flowers and went on to plant them near a food court entrance along First Street and ever since then more people are joining her.

A team of vendors who operate from that area and a passer-by joined in the digging and planting of the flowers and they watered them with buckets using water from a broken pipe.

In return she has been advertising these vendors handiwork on her social media platform encouraging the people abroad to promote these small businesses which has attracted a great response.

Savanna’s hope is to make it a long term initiative. Her hope is to inspire the citizens of Harare and Zimbabwe as a whole to act and take action where things affect them as a community, without waiting for the government or city council to do it for them.

The beauty of that small space attracted people who then came to take selfies and just hang out there. Since then the vendors have taken ownership of the flowers enjoying working in the now attractive environment.

“Forget the flowers, this is about changing attitudes, perspectives and also changing our narrative. My ‘We The People/Tisu Vanhu Vacho’ initiative is a concept that I hope will create awareness amongst individuals and communities at local level and in the nation at large about the need for cooperation and shared responsibilities in the governance and management of our cities, towns and rural areas,” she said.

“If you believe in Ubuntu, and stand for Hunhu, you are part of ‘We The People’ the thread that binds all humanity. We operate on ideas, not profit. We rally together innovators, leaders, game-changers, thinkers, rebels, artists, disrupters, dreamers and doers. Every day, we gather to share ideas, inspire action and create change,” she said.

She is viciously determined.

“We believe in the transformative power of the community. That whatever happens to the individual, happens to all of us and vice-versa. Unhu puts shared values at the epicentre of how we think and act for the dignity of people, and live in harmony with nature. We care for the world and all those with whom we share it. We are global citizens, transcending without negating our Zimbabwean heritage”, she added.

She also mentioned that what she is doing teaches citizens to take ownership of their community as well as hold leadership accountable by action. She said, this springs from our total faith in our creativity, enterprise and ability to organise ourselves.

Out of the lessons of the past and the aspirations of the future, we are relentless about creating innovative partnerships that give wings to the aspirations of millions of people. When we act with unity of purpose and rise above self-interest, change will happen. Together, we can unlock infinite possibilities and end wasted potential.

“The sooner that we all realise that service delivery and a better life are a responsibility for everyone, the better. Great strides have been made already, this is not about me as an individual and my journey to find healing but the buy-in from all stakeholders is equally important for continuity.”

The citizens in the diaspora have partnered with her and are already funding the project in helping to dismantle what she calls the DEPENDENCY AND HELPLESS SYNDROME (DHS) also known as the DAI HURUMENDE SYNDROME (DHS) with the hope of shaping people by changing mind-sets.

“Corporates like GOLDMA and the City council have agreed to work with us in a bid to rebuild the broken trust with the citizens.

Some of the flowers we are using are from the city council nurseries and we are working towards a partisanship with citizens on waste management on First Street as well as the need to have access to free public toilets for all who use First Street.”

“Together with Department of parks watering the plants is going to be a joint venture with citizen who spend time on First Street mostly vendors who have welcomed this and are happy to be part of the solution and to begin to mend the broken relationships with local authorities,” said Savanna.

Savanna is a New Yok based business woman since the year 2000.

“I work in the service industry, building teams and cultures, mostly with celebrity chefs and building and running trendy places for them,” she revealed.

“I worked with celebrity Chef Marcus Samuelsson for over 10 years.  We hosted the first Democrats fundraising dinner for then Candidate Barak Obama at The Red Rooster, a trendy restaurant in the heart of Harlem 125th street a few blocks from Malcolm X famous church where a plate was going for over US$30 800,” she said.

I also ran a trendy place for Rock singer Jon Bon Jovi in Partnership with Marcus in The East Hamptons; a summer hot spot for the rich and famous.

With such brilliant minds, it is a wonder why our city is a large dumpsite. People to people initiatives of this sort can fix the rot that filthy Harare has become.