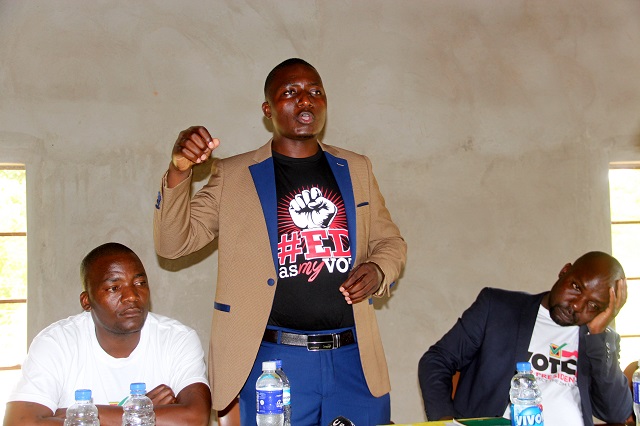 Vincent Gono, Features Editor
ZANU-PF has promised serious disciplinary measures to perpetrators of violence in the forthcoming general elections within its ranks and has re-affirmed its commitment to the holding of free, fair and credible elections warning that those who do not move with the vision of President Emmerson Mnangagwa risk being dropped.

Speaking during a dialogue meeting organised by Leaders for Africa Network (LAN) yesterday at a Bulawayo hotel, the party’s deputy secretary for youth affairs Cde Lewis Matutu said the President Cde Emmerson Mnangagwa made it clear that the country wanted a genuine transformation in the way political office should be sought.

“As a party we have adopted a zero tolerance to violence. We got the message clear from the party leader Cde Mnangagwa that there should be political tolerance in the country and we are going to impose serious punitive measures to those from the party who will perpetrate violence. We will not hesitate to expel members found guilty of violence. That is a culture that we need to put past us as a people and we also call on other political parties to embrace the spirit of political tolerance,” he said responding to the question on the party’s commitment towards a violent free election.

He said it was surprising that the MDC-T that had been failing to control violence within its ranks was the loudest and pointing fingers at Zanu-PF. Cde Matutu said the country had invited the EU and other international observers as part of transformative shift to the holding of elections saying denying them the chance to observe was read to mean there was something the party was conspicuous about.

Asked by one of the panelists Mr Ben Moyo where the party has suddenly derived its confidence and boldness to invite international observers, Cde Matutu responded that it was how the new political dispensation was doing things which required an above board approach to national politics.

“There is enough political will and commitment within the leadership. That is why the party listened and invited EU and other key international observers. Interestingly after inviting them the same people who wanted them are now questioning the sincerity of the party and one begs the answer to the question ‘what really do people want’,” he said.

He added that the invitation of the observers was part of efforts by the country to re-engage the international community.

On the country’s open for business mantra Mr Gift Ostallos Siziba who was one of the panelists representing MDC-T and Mr Moyo felt that the President was inviting people to come and “loot the country’s resources, giving a perception that the country did not need foreign direct investment to develop”.

National Assembly Member for Mpopoma-Pelandaba Cde Joseph Tshuma who was also part of the panelists responded that FDIs were important, adding that the country could not continue living in isolation of international relations. He also said the country’s leadership was so much awake to the preservation of the national resources.

“The social and economic dynamics requires that we be part of the international community. We cannot afford to be bullies when we are poor. It also requires that we open for business with an open mind for a win-win situation between the investor and the country,” he said.

Issues of Gukurahundi, confidence in the economy and deconstruction of patriarch architecture within the political playing field were also raised and responded to.