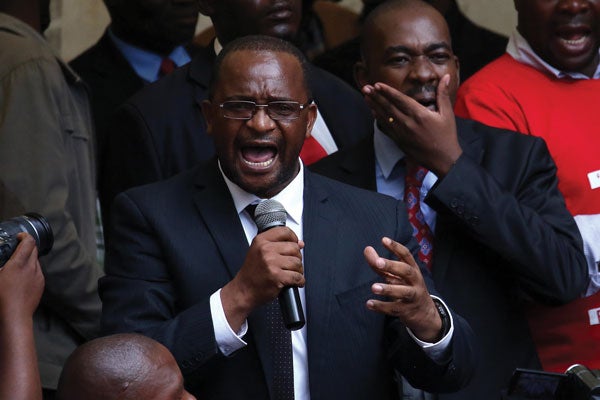 Mwonzora said this in the Senate during debate on the Money Laundering and Proceeds of Crime Bill which was brought before Parliament by Justice minister Ziyambi Ziyambi where he pointed out that he suspected that the Bill was being crafted to deal with a shadowy Zanu PF political outfit called G40.

G40 was very active during former leader, the late President Robert Mugabe’s time and had rivalry with the Lacoste faction allegedly fronted by President Emmerson Mnangagwa.

The law seeks to curb corruption by demanding clarification on unexplained wealth and targets terrorism financing.

“In other words and like what happened in 2008 where organised gangs were sent on payment to terrorise people: That kind of terrorism is not covered by this law,” he said.

In 2008 there was a campaign of violence and repression in Zimbabwe, aimed at destroying the opposition and ensuring that the late Robert Mugabe retained the presidency in elections runoff.

Zanu PF activists reportedly tortured “sell outs” particularly in areas considered its strongholds that had voted for the MDC in the parliamentary and first-round presidential elections, through an exercise dubbed “Operation Makavhoterapapi? (Where Did You Put Your Vote?)”

Mwonzora said he suspected that the law was being crafted with certain people in mind, for example, due to factionalism in political parties in Zimbabwe.

“There is always something wrong in making a law with a group of people in mind; a group of internal party opponents or former party opponents. At one point in time, we made a law when we were debating the Constitution. We were very clear that when we talked about the President, it was a man called Robert Mugabe.

“The wrongness of that is apparent when that person is not there. I want to appeal to my learned colleagues, who are in Zanu PF, and say that we do know for certain that there are internal dynamics. We do know that there is an outfit called G40. We do not have to like it, I do not like it, but we do know that it exists. But making a law apparently targeting that group is wrong,” he said.

“The fears of Mwonzora are not founded and this is a very good and progressive law that will allow us to deal with corruption and ensure that we will be recognised as a Senate that passed a law that helps this country in the fight against corruption,” Ziyambi said.

He said the aim of the Money Laundering and Proceeds of Crime Bill was to curb corruption by acts of extortion, fraud, theft, tax evasion, robbery, hoarding of huge amounts of cash and property which the owners do not utilise themselves.

“Homes become unaffordable because of them, capital that should be channeled through banks and other lending institutions is wasted and made unavailable for loans to buy houses or to start business or to employ persons gainfully,” Ziyambi said.