Don’t go to Zim, Maimane, they won’t let you in – SA ambassador

Source: Don’t go to Zim, Maimane, they won’t let you in – SA ambassador – The Citizen 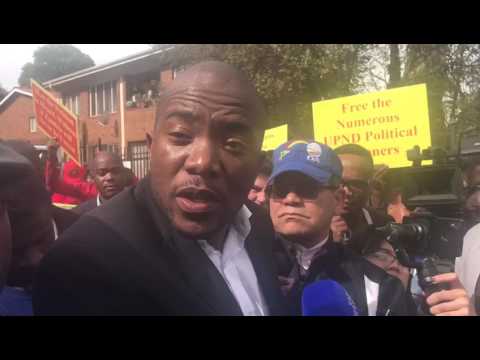 FILE PICTURE: Mmusi Maimane speaks about being barred from entering Zambia. May, 2017.

Mphakama Mbete has warned the DA leader that his trip could be like ‘Zambia’ all over again.

The South African ambassador to Zimbabwe, Mphakama Mbete, has warned DA leader Mmusi Maimane not to meddle in Zimbabwean politics, warning him that he may be turned away from the airport, much like he was from Zambia in 2017, Zoom Zimbabwe reports.

Maimane was prevented from entering Zambia in May 2017. He had travelled to the country to “attend and observe” the treason trial of Zambian opposition leader Hakainde Hichilema.

According to then DA national spokesperson Phumzile Van Damme, Maimane was there in support of Hichilema. He had been outspoken against what the DA called the “trumped-up charges” against the opposition leader, who the party believed was “unduly persecuted by his government”.

On Monday, Maimane announced that he would be travelling to Zimbabwe to meet Nelson Chamisa, the leader of the country’s main opposition, the MDC, as well as former MDC leader Tendai Biti.

“The purpose of this visit is to seek practical solutions to the ongoing crisis, and garner support across the region for much-needed intervention in Zimbabwe,” Maimane said.

Maimane’s involvement in the situation in Zimbabwe was met with an attack from the country’s ruling party Zanu PF.

The party accused the DA leader of adopting an “aggressive posture for the gallery” on Zimbabwe.

Particularly, Moyo dismissed Maimane’s pronouncement on Tuesday that he would approach the International Criminal Court (ICC) and the United Nations Human Rights Council (UNHRC) regarding the situation in Zimbabwe.

Moyo said the country had nothing to fear from the ICC, as they weren’t a member of it and “have no relationship with them”.

Mutodi made the news on Wednesday for defending the recent internet shutdown in Zimbabwe and saying the government wouldn’t hesitate to enforce one again.

According to Mutodi, the shutdown was necessary because the people of the country were “backward” and “primitive”.

The DA reportedly feel intervention is needed in Zimbabwe, particularly because they feel President Cyril Ramaphosa is not doing enough.

“To date, Ramaphosa has simply called for the end to sanctions against Zimbabwe. The president is mistaken to focus solely on the economic situation in Zimbabwe whilst turning a blind eye to the dictator-like military clampdown on citizens which has to date claimed the lives of at least 12 people,” said a DA statement released on Monday.

Widespread unrest in Zimbabwe was sparked when President Emmerson Mnangagwa announced a crippling fuel hike which saw the country’s petrol price more than double on January 14.

The country was already struggling through a financial crisis which had driven the price of fuel, food, and other commodities up beyond what many Zimbabweans could afford.