British Foreign Secretary Boris Johnson – brimming with all the enthusiasm of a 10 year old stamp collector suddenly coming across a triangular from Tanganyika – was ready to usher Zimbabwe back into the Commonwealth on the back of a military coup in Salisbury, or Harare as it is now known. (Presumably the other 50 or so members of the Commonwealth would do what Bwana Boris told them.) 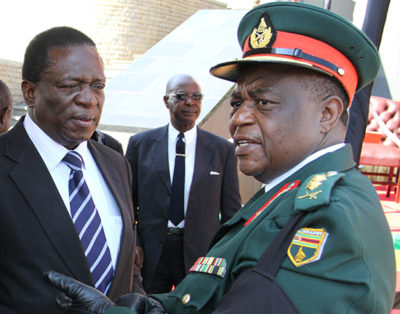 His Africa Minister Rory Stewart, equally enthusiastic, flew out to Zimbabwe to shake the hand of the Conqueror of Mugabe, holding out the promise of an open cheque book. The US, normally more sensible in these affairs, was also welcoming. A rusty tinpot Marxist lunatic dethroned: anything must be an improvement.

But something went wrong – even before modern history graduate Stewart had time to read  the page on Zimbabwe. What was taken to be a day of joy and freedom, of liberation and release – the crossing of the Jordan – was nothing of the kind. It was from purgatory to purgatory. Nothing has improved. There has just been a change of guard.

The announcement of Mnangagwa’s new cabinet was a slap in the face for all – like the British Foreign Office – who had been led to believe that he was on board to save Zimbabwe – in other words that he realised that he needed Western help to turn around the economy and create jobs.

The new cabinet, packed with contaminated genocidaires from the armed forces and discredited former Mugabe freeloaders, has dashed hopes of economic recovery. We had been led to believe that under the West’s clever Baldrick-type master plan, the eager convert Mnangagwa would embrace the prospect of new money from the World Bank and International Monetary Fund. After all, his mob has stolen just about everything available in Zimbabwe.

In reality, he has increased unemployment, sacking the Pschomotor Minister for a start. Just when we needed him. We know from the ground the depths of despair in Zimbabwe. But economic reality will bring down the military regime sooner rather than later.

Thanks to those who came early to set up and stayed till the end of the Vigil to help pack up: Racqueline Changunda, Miriam Gasho, Babula Gwatiringa, Jonathan Kariwo, Fungayi Mabhunu, Junior Madzimure, Rosemary Maponga and Hazvinei Saili. Thanks also to Patience Muyeye, Racqueline and Rosemary for looking after the front table and to Babula, Junior, Hazvinei and Miriam for handing out flyers.

FOR THE RECORD: 23 signed the register.