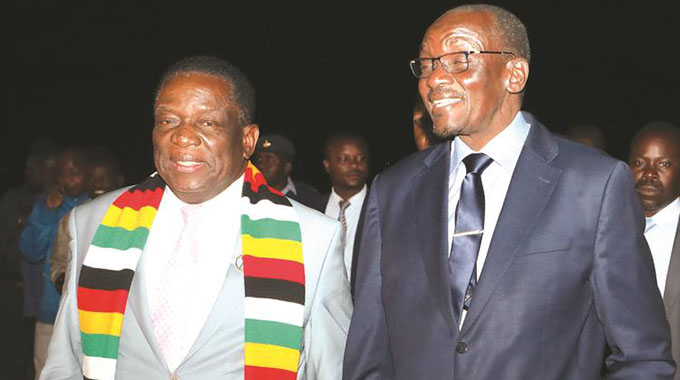 President Emmerson Mnangagwa is reportedly behind former Vice President Kembo Mohadi’s resignation because their families clashed over business interests in Beitbridge and in Penhalonga, investigative journalists The NewsHawks report.

Sources privy to the developments told the publication that the families first clashed over the Dry Port that was being constructed by Mohadi in Beitbridge in 2019:

Mohadi two years ago set up a dry port project called Malindi Dry Port with some local business. He has vast tracts of land in Beitbridge. A fight subsequently erupted among the Malindi partners and as a result some of them pulled out to set up their own project.

They then invited some members of the Mnangagwa family, but Mohadi was unimpressed and upset by the move. He then protested to the Mnangagwas, who were themselves not happy with his bid to push them out of Beitbridge.

The dispute deteriorated as Mohadi insisted that the Mnangagwa family members should not come to Beitbridge to seize opportunities from him take bread from his mouth. That became a sore point between them.

He is aware of the real reasons why he was removed. Ask him, he will tell if you can convince him to talk.

Mohadi’s calls were reportedly monitored by the Central Intelligence Organisation (CIO) since 2019 and the purpose of that task was to use the recordings to remove him from power when or if it became necessary.  A source that spoke to The NewsHawks is quoted as saying:

Mohadi’s phone was being monitored since 2019 and all his business dealings and political interactions, as well as personal indiscretions were known. This was because he had clashed with the First Family over the establishment of a dry port in Beitbridge.

Mohadi has an interest in a cargo bonded warehouse facility at the border so he intended to expand his interests to dry port, but Mnangagwa’s sons also had theinterest in the same venture. He confronted the boys and that created serious problems.

Mohadi and Mnangagwa reportedly clashed over gold mining in Penhalonga too and Mohadi reportedly tried to resolve the issue amicably to no avail.

Mohadi resigned on 1 March 2021 after ZimLive unearthed his se_x scandal with different women but he insisted that he was a victim of voice clowning as he denied the scandals.