Farirai Machivenyika Senior Reporter
President Mnangagwa yesterday commissioned 39 of 300 buses which the Government has secured as part of measures to ease the plight of commuters who are being ripped off by private operators.

The 300 buses are part of an overall Government policy to revamp the transport sector and introduce a mass transport system, with a further 500 buses from Belarus soon to be availed.

The commissioning of the buses yesterday coincided with the launch of a computerised system that will be installed in the buses, designed by Dr Talon Garikayi, the director of Technology Transfer at the Harare Institute of Technology (HIT).

The system can be used for issuing fuel, monitoring consumption, tracking, real time financial reporting, among others.

The agreement for the supply of the 500 buses was reached when the President visited Belarus as part of his Eurasian tour in January.

“When I went away to visit Russia, Belarus, Azerbaijan and Kazakhstan in January, one of the issues I came back and stated to the nation was that we had arranged to acquire 500 buses from the Republic of Belarus,” President Mnangagwa related as he launched the buses.

The President said Government then decided to procure the 300 buses in the short term to address the plight of commuters. 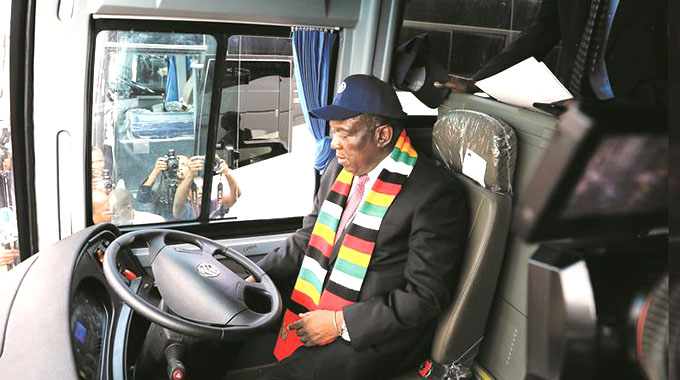 “So, we decided that it was necessary to have a stable transport system

both in the urban and countryside. But because the arrangements we had made in Europe would take longer, we decided to make preliminary arrangements which would bring about 300 buses before the 500 come from Europe.

“This 300; 200 are from South Africa and 100 from China and these began coming into the country a few days ago and on daily basis they are arriving. Some arrived yesterday (Monday), some tomorrow (today) and so on, but we believe that by month end, all the 300 buses will be in Harare. This consignment is now ready to be put into operation,” he added.

The President added that Government was committed to providing a modern and decent transport system to the commuting public.

“Government thinks it is necessary to provide a transport safety nest that will protect the public from unscrupulous public transport and combi operators by providing modern, decent and digital transport system.

President Mnangagwa said the current transport system was riddled with many challenges for commuters that include high fares and high accident rates among others.

Speaking on the digital system to be installed in the buses the President said it would eliminate the thieves and cheats that were ripping of the public.

“We are grateful that a new system has been introduced by HIT where all these malpractices will be eliminated,” the President said.

“This system is an innovation by our boys and girls. We don’t need any MoUs ort MoAs. It’s manufactured here locally by our children. This means the authorities will able to track where the bus is and the funds that have come in. This technology gives us the possibility to install it in other Government systems like at CMED we are having problems with thefts, abuse of fuel and motor vehicles. I am happy that all this will come to an end.”

He said the technology would further achieve targets set under Vision 2030.

Under the Transitional Stabilisation Programme (TSP), mass transport is cited as a key enabler of the economic turnaround.

“An efficient and adequate transport system is critical for the development of the country, providing access to markets including reducing regional disparities.

“The road, rail and air sub-sectors are critical in rapid industrialisation and agricultural advancement as they facilitate trade and movement of goods and people, hence, the need to rehabilitate and upgrade the current stock of assets,”  says TSP.