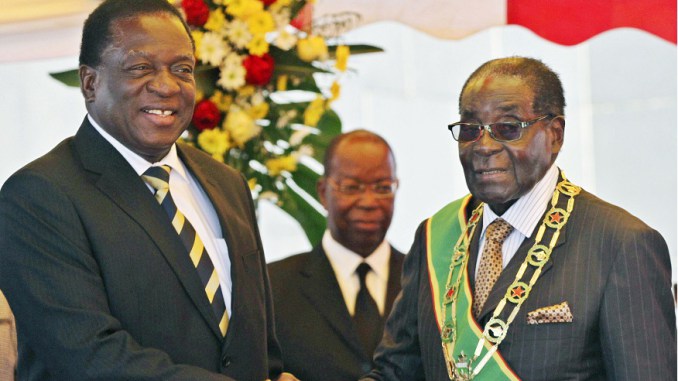 It is hard to imagine Robert Mugabe standing in line for fried chicken and chips at a provincial fast-food outlet.

That is exactly what Zimbabwe’s President Emmerson Mnangagwa did last month as he tries to bury the memories of his long ties to Mugabe and rebrand himself as a “man of the people” ahead of what is expected to be a tight election on Monday.

Mnangagwa, a 75-year-old who came to power after Mugabe was removed in a de facto coup last November, has campaigned on a promise to mend. “Some have eyes, but they do not see, others have ears, but cannot hear that we are in a new Zimbabwe,” Mnangagwa told Zanu PF supporters at a rally last week, draped in his trademark scarf in the colours of the national flag.

“Together we will rebuild our nation, a new prosperous Zimbabwe for our people.”

Mnangagwa, known as “the crocodile”, an animal famed in Zimbabwean lore for its stealth and ruthlessness, was removed as vice-president by Mugabe last November to make way for his wife, Grace, to seize power.

This was too much for army generals who rolled military vehicles through the streets of the capital Harare and kept Mugabe, 94, under house arrest. for all his talk of a “new” Zimbabwe, Mnangagwa’s opponents are at pains to remind people that he was a trusted lieutenant of Mugabe for five decades and has failed to deliver on promises of change in the past.

“Mnangagwa has been in politics for 60 years and in power, as the chief enforcer of Zimbabwe’s first republic for 38 years,” Jonathan Moyo, the main voice of Grace Mugabe’s political faction, said this week on his Twitter feed.
“Lies come easy to him. It’s time for generational change. Creators and enforcers of the old dispensation cannot lead the new dispensation.”

Yet there is cautious optimism among diplomats and foreign investors that things are slowly improving.

Mnangagwa invited international observers to watch the election and allowed the opposition far more freedom to campaign, although his main rival, Nelson Chamisa, says the process is still being rigged by a biased electoral commission.

Mnangagwa has even reached out to white Zimbabweans, including promising farmers there will be an end to the violent farm evictions that began in 2000 in what Mugabe defended as a way to address post-colonial racial imbalances.
“I’m humbled,” said Christine Moorcroft, one of more than a hundred white Zimbabweans addressed by Mnangagwa last week.

“He is talking about us being ‘one people’. We’ve never heard that from Zanu before. I will vote for ED (Emmerson Dambudzo) next week.”

Mnangagwa survived an attempt on his life last month when a grenade was thrown at the stage during a campaign rally.

In a measured response, he said he suspected dissidents from his own party were behind the attack.

Those who know him say his reaction to the attack was typical of a man trained as a lawyer who leads with a quiet authority that surprises many who meet the feared former intelligence chief.

“If I had to describe him, the first word that comes to mind is ‘calm’,” a senior Western diplomat in Harare said.
“He has control of a room without having to shout. A little look or a wry laugh is enough to tell people his mind.”
Son of farmers, Mnangagwa learned his politics in prison in the 1960s after being sentenced to death for sabotage by British authorities.

He was captured while in one of the earliest guerilla units fighting white colonial rule in what was then Rhodesia. Only 19, he was spared the noose by a law prohibiting the execution of convicts under 21.

After a decade in prison, often sharing a cell with Mugabe, Mnangagwa became personal assistant to the leader of the liberation struggle, and went on to head the guerilla movement’s feared internal security bureau.

Mnangagwa backed Mugabe’s economic nationalism, especially a drive to force foreign firms to hand majority stakes to local blacks, suggesting he may not be the pro-market pragmatist many investors were hoping for.

He has been in every administration since independence, holding posts as varied as minister of state security, defence and finance, as well as speaker of parliament.

Most controversially, Mnangagwa was in charge of internal security in the mid-1980s when Mugabe deployed a North Korean-trained brigade against rebels loyal to his rival Joshua Nkomo.

Rights groups say 20 000 civilians, mostly from the Ndebele tribe, were killed in what has become known as the massacres of Gukurahundi, meaning “the early rain which washes away the chaff before the spring rains”.

Mnangagwa’s role remains shrouded in mystery. Always a political operator, he trained as a communist guerilla in China in the 1960s and stayed in the shadows behind Mugabe.

Mnangagwa denies responsibility, but prior to the killings he said the government needed to bring “DDT” to rid itself of “cockroaches”.

“Mnangagwa knows only too well about his genocidal involvement in Gukurahundi,” Jonathan Moyo said.

“He must be haunted by ‘cockroaches’ and ‘DDT’; the screams of torture victims and the tears of the dead.”