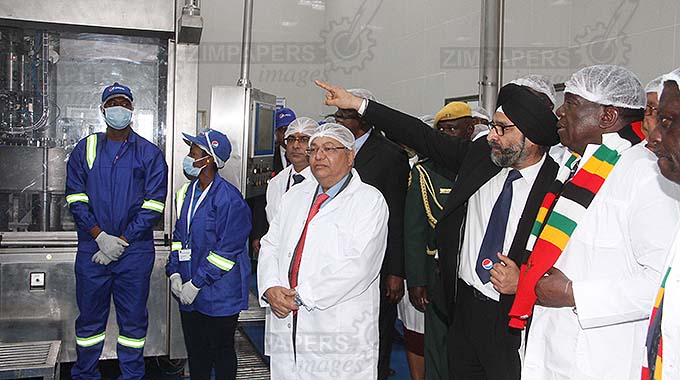 President Mnangagwa (right) on tour of the Pepsi plant accompanied by RJ Corp Group head Technical Rajinder Bagga and other dignitaries during its official opening in Harare on Wednesday. – Picture by Justin Mutenda

The President said this on Wednesday while officiating at the commissioning of a $30 million Varun Beverages plant in Harare. Varun Beverages is a subsidiary of global conglomerate RJ Corp and produces Pepsi products.

Tax holidays and incentives, the President said, will help attract more attract foreign investment into the country, which will go a long way in creating decent jobs for the populace and help the country to attain the Government’s agenda of making Zimbabwe a middle income state by 2030.

“When I arrived (at Pepsi’s plant) I saw Patrick Chinamasa, Minister of Finance (and Economic Planning), I said why are you here,” said the President.

“He said I just wanted to see whether this is a taxable entity and I think he is smiling, but Minister (Chinamasa), such investments also require incentives.

“I know he (Minister Chinamsa) will agree with me. As Government we will have more companies coming here if we give them incentives, tax breaks. . .

“While this investment (by Varun Beverages) attests to the steadily increasing attractiveness of our business climate to investors from far and wide, my Government is continuously monitoring our investment climate to ensure that it remains conducive and open for business to grow and succeed,” he said.

Minister Chinamasa on his part has previously conceded that Zimbabwe had high taxes compared to other international destinations, pointing out Government was working on a framework to reduce as an incentive to grow the cake.

“Taxation, I agree with you, is too high,” said Minister Chinamasa while responding to contributions from participants who attended the President’s meeting with Zimbabweans in the Diaspora, during his regional tours in January.

“It’s a matter that we are going to address, so that we can proceed to move to a position where we get more taxes from more volumes,” he said Minister Chinamasa then.

President Mnangagwa said investments such as the one by Varun Beverages should be celebrated as they created decent jobs, bear real opportunities and prospects of a better life for local people.

He said the manufacturing sector and its strong performance were particularly very important to the broader economy because the sector had a strong bearing on the rate of the country’s overall economic growth. The investment, he said, augurs well with Government’s thrust to re-equip and modernise industrial equipment in order to give the country a competitive edge.

“This investment by Varun Beverages is also in sync with our national industrial development policy objectives and strategies where we seek to, among other issues, to re-equip, replace and modernise obsolete equipment and machinery in our industries in line with new technologies that will ultimately increase the economies of scale and product competitiveness,” said the President.

“It further resonates with the Sadc industrialisation strategy which seeks to develop the manufacturing sector using the value chain approach to enhance exports of value added products in the region and the rest of the world,” he said.