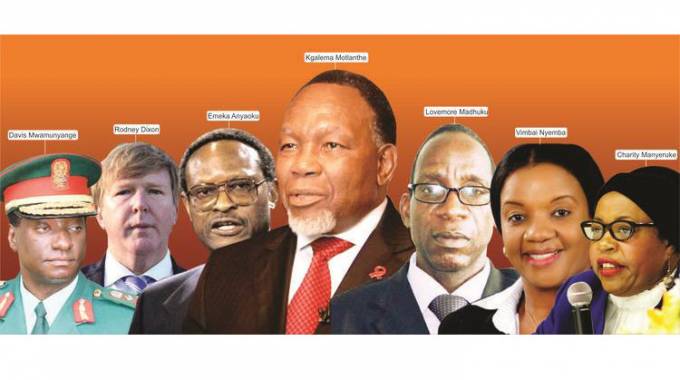 Six people died, while property worth thousands of dollars was destroyed by MDC-Alliance supporters who went on the rampage during the violent demonstration.

Other members of the commission from outside the country are international law expert Mr Rodney Dixon QC from the United Kingdom, former Commonwealth Secretary-General Chief Emeka Anyaoku from Nigeria and former Chief of Defence Forces of the Tanzania People’s Defence Forces General (Retired) Davis Mwamunyange.

“In fulfilment of what I have earlier on undertaken to do, in order to address the matter in a transparent manner and in the public interest, I have appointed a seven-member Commission to inquire into the post-election violence,” said President Mnangagwa while making the announcement at his Munhumutapa offices.

“The Commission is made up of local, regional and international members, who have been appointed in terms of the Commission of Inquiry Act (Chapter 10:07).”

President Mnangagwa said the commission’s terms of reference were to inquire into the circumstances leading to the violence, to identify actors and their leaders, motive and strategies employed, among other pertinent issues.

Other terms of reference are to “investigate any other matters which the Commission of Inquiry may deem appropriate and relevant to the inquiry, to make suitable recommendations and to report to the President in writing, the result of the inquiry within a period of three months from the date of swearing in of the Commission.”

President Mnangagwa said a notice officially announcing the setting up of the Commission will be published in the Government Gazette in accordance with the law.

Asked when the Commission would start work, President Mnangagwa said it would be sworn in next week after his return from China where he will attend the Forum on China-Africa Co-operation.

“As soon as possible,” he said about when the Commission would get down to work. “We have consulted all the seven and they have all agreed. Arrangements are being made for them to be resident in Zimbabwe during the process.

“We are travelling to China for the FOCAC on Friday this week which is in two days’ time, when I am back I will be able to swear them in.”

Some journalists asked why there was need for a Commission when the violence took place in the streets where people captured with their cameras some soldiers firing at the demonstrators.

“If you have any evidence to all what you are saying, give it to the Commission,” said President Mnangagwa. “Everything must be transparent. This happened in the glare of the international media, we would want the investigations again to be done in the same manner and the report to be produced and published.

“The culprits to be dealt with, we do not want to deal with it privately as you are suggesting.”
Asked on the rationale of constituting the Commission when the police had blamed the MDC Alliance for the violence, President Mnangagwa said: “Let those who have that evidence go to the Commission and state what you are saying so that it will be in the report. Once it is submitted, the President of the Republic will make it public.”

Violence broke out in Harare’s city centre after some supporters of the MDC Alliance embarked on a violent protest and besieged the National Results Command Centre before torching buildings and vehicles.

This resulted in the police requesting the involvement of the army, with the law enforcement agency saying they were overwhelmed as some of their members were still providing security at several polling stations across the country.
The law allows the police to call for help from other security agencies if they become overwhelmed by situations.