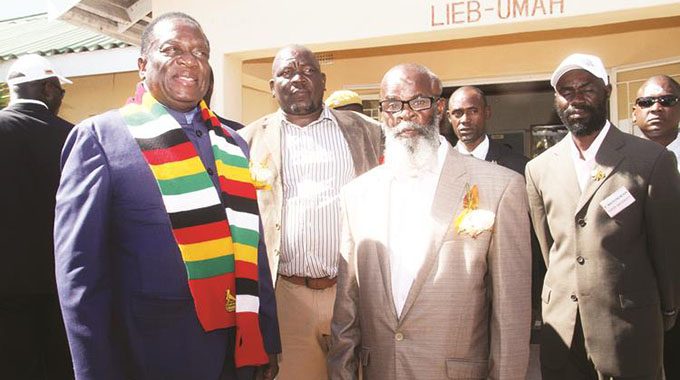 President Mnangagwa is welcomed by Johane Marange Apostolic Church leader Noah Taguta (bespectacled) on arrival for a ground-breaking ceremony for the construction of a stadium at St Noah College in Bocha, Marange, yesterday. Looking on is church member and property developer Mr Charumbira (centre). — (More pictures on Page 4). — (Picture by Kudakwashe Hunda)

Farirai Machivenyika Senior Reporter
President Mnangagwa has implored Zanu-PF cadres who lost in recent primary elections to embrace the results and work together with winners to ensure victory for the ruling party in the harmonised elections.

The Zanu-PF President and First Secretary said this while addressing over 35 000 people gathered to witness the ground-breaking ceremony of St Noah Sports Stadium at St Noah College in Bocha, Marange, yesterday.

President Mnangagwa said in a democratic process there were always winners and losers.

“You conducted your primary elections recently where you elected your representatives and I know there are some who are happy with the result, while others are not. That is how democracy works.

“What is important is that we all unite, be they winners or losers because at the end of the day it is not individuals that won, but the party,” he said.

People, he added, should not shun those who lost in the polls.

“We should all work together and not shun those who lost. We do not want that. Occupying positions of leadership is God’s plan.

“If that was not the case would I have returned after I skipped the border last year? It happened because it had to happen that time and when I returned, it was God’s plan that I returned. That is how God works. We should accept it,” added President Mnangagwa.

Zanu-PF recently held primary elections ahead of harmonised elections expected to be held in July.

The internal polls had some glitches that spawned reruns in some constituencies following complaints by candidates.

President Mnangagwa told the gathering that Government was prioritising economic development in its programmes. 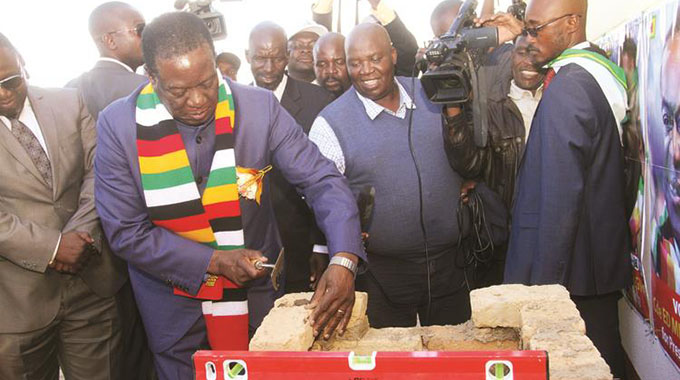 President Mnangagwa lays a brick at the launch of the construction of St Noah College Stadium in Bocha, Marange, yesterday. — Picture by Kudakwashe Hunda

“What we are prioritising as Government is economic growth,” he said.

“We know politics is important but it comes after five years and those who are eligible to vote should go and vote.

“If there is anyone who does not have identity documents, they should see my ministers here so that they are assisted in getting the documents.”

President Mnangagwa said he was hopeful that the people of Bocha would vote for him and Zanu-PF.

He called for peace.

“We have invited several countries and organisations to come and observe our elections.

“We have said Zimbabwe is open for business. We want free, fair, transparent and credible elections and that can only happen in a peaceful environment, so I hope all of us want peace and want to do our things peacefully and in unity,” President Mnangagwa said.

Several pre-election observer missions from Sadc, AU, Europe and the US have already visited Zimbabwe to assess the environment ahead of elections.

The President said Government had initiated various development programmes, among them fish breeding and the rearing of cattle, that were meant to benefit communities, especially in rural areas.