ED tries to wriggle out of Malaba crisis

Source: ED tries to wriggle out of Malaba crisis | The Standard 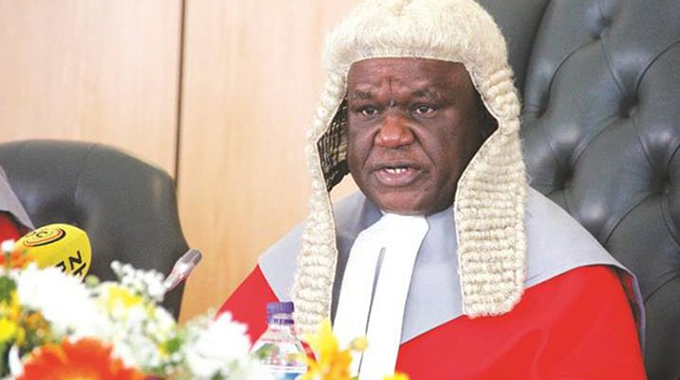 President Emmerson Mnangagwa will use a carrot-and-stick approach against the judiciary in an attempt to wriggle out of what has been described as a constitutional crisis after he bungled the renewal of former chief justice Luke Malaba’s term, it has emerged.

Senior government officials said options on the table for Mnangagwa included appointing acting Supreme Court judges from the High Court bench to preside over government’s appeal against the landmark ruling that ended Malaba’s term over a week ago.

Three High Court judges ruled that attempts by the president to extend the top judge’s term of office after he had reached the retirement age of 70 were illegal.

The Standard is informed that the government is mulling using the recently amended clause that gives Mnangagwa powers to handpick judges to manipulate some High Court judges to preside over the matter.

The Judicial Service Commission (JSC), on the other hand, has reportedly proposed the roping-in of three retired judges to preside over government’s appeal against a High Court ruling suspending the extension of Chief Justice Luke Malaba’s tenure with five more years.

Retired judges Justices George Smith, Vernanda Ziyambi and Ahmed Ebrahim, who resigned in 2002 accusing the government of violating the law, have reportedly been listed by the JSC for recommendation to Mnangagwa for the tough assignment.

Well-placed government sources have disclosed that Mnangagwa will use the carrot-and-stick on the judges to come up with a favourable outcome on both the process and ruling.

“The plan is that they will be told that if Justice Malaba does not come back, and as long as President Mnangagwa is in power, they will never be promoted to the Supreme Court bench.”

But the problem, a legal expert with the government said, will be that the judges will have to be appointed by the Acting Chief Justice, Justice Elizabeth Gwaunza, who is a conflicted party in the matter.

The problem has been made worse because the JSC is also now a respondent and therefore cannot pick judges or recommend to Mnangagwa those who can preside over the matter.

The Chief Justice only appoints Constitutional Court judges and is also responsible for appointing retired judges, according to section 166 (2).

Asked for a comment, Justice permanent secretary Virginia Mabhiza said those were imaginations coming from people who think that the country is in a constitutional crisis.

“This cannot be true,” Mabhiza said, reacting to the appointment of High Court judges to the Supreme Court to hear the Malaba case.

“I believe it’s speculation based on the misconception that there is a constitutional crisis.”

Advocate Tafadzwa Lancelot Mapuranga said it’s possible that the government might appoint other judges of the High Court.

“You can’t sit in a matter which you are part of. That’s a basic legal principle,” Mapuranga said.

“If your name appears, you can’t sit. However, there are other legal technicalities which might arise in a few weeks. They might want to appoint High Court judges to the Supreme Court to hear the matter, but not necessarily those who are cited. Those still remain conflicted like the substantive Supreme Court judges.”

No High Court judge was listed as respondents.

Some legal experts and Zanu PF apologists blamed Ziyambi and Mabhiza for creating the crisis.

“The letter to extend the term limit came a day after the Chief Justice had been retired by age, so it means, on the 15th and so the real term to have been used was, the President has recalled Justice Malaba. You don’t extend when one has already retired,” a Zanu PF official said.

The Standard is informed there has been pressure on Mnangagwa to reassign Ziyambi after his attack on the Judiciary, which most people said was childish and a way of trying to atone for his failures after ill-advising Mnangagwa on the day to extend Justice Malaba’s term.

Well-placed sources also said there are very limited chances that Justice Malaba will come back. They said most High Court judges were opposed to his way of leadership that saw judges fall under surveillance from magistrates who form the majority of the JSC, an insider said.

“Eight High Court judges were on notice and the judges, both at the High Court and Supreme Court, are also against the former Chief Justice’s decision to have all judgements submitted to him for review.”

The tribunal that is trying Justice Erica Ndewere to determine her fitness for office heard that Justice Malaba interfered with the work of judges.

The country was thrown into a constitutional crisis two weeks ago after High Court judge Justice Happias Zhou delivered a ruling that declared illegal Mnangagwa’s extension of Justice Malaba’s term.

The ruling triggered an outburst from Justice minister Ziyambi, who attacked judges for allegedly being captured by foreign governments, threatening “to poke the enemy in the eye”.

Newer Post
Chinese project fans Zanu PF factionalism in Dinde
Older Post
Why are Christians some of the most unChristian people in this world?