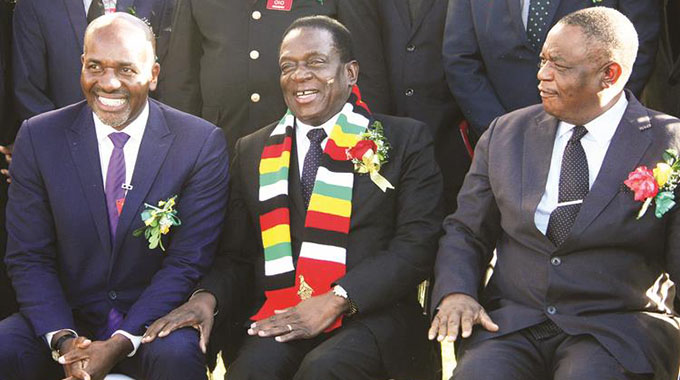 President Mnangagwa flanked by Vice President Constantino Chiwenga (right) and Sable Chemicals board chairman Mr Shingi Mutasa during a tour of the plant in Kwekwe yesterday. — (Picture by Justin Mutenda)

Tendai Mugabe in KWEKWE
President Mnangagwa has said reopening closed companies and ensuring they contribute significantly to the economy is his Government’s top priority.

He has set a target to turn Zimbabwe into a middle-income economy by 2030.

President Mnangagwa made the pledge yesterday as he toured Sable Chemicals outside Kwekwe.

He promised to support the country’s sole ammonium nitrate manufacturer with foreign currency, as the company sits at the heart of the country’s economic recovery.

President Mnangagwa told delegates after touring the Sable Chemicals plant that his Government had a comprehensive model to increase food production.

He said companies such as Sable Chemicals should actively contribute by ensuring sustainable and adequate supplies of fertiliser.

President Mnangagwa undertook the tour to familiarise himself with challenges faced by Sable Chemicals and it was the first visit by a sitting Head of State and Government to the top dressing fertiliser producer.

“The success of Sable Chemicals will have ripple effects on the growth of other industries and the economy at large.

“Sable Chemicals is a strategic contributor to the country’s industrialisation agenda and the success of the modernisation of the agricultural sector.

“It occupies a unique space in this economy and its success will yield a wide range of cross cutting benefits. I urge the company to take advantage of the regional markets within Sadc, Comesa and the rest of the African continent to export its surplus output to stimulate export growth and earn foreign currency,” he said.

“However, for the company to do so, it is necessary that my administration first makes the move to support the company with foreign currency.”

He said Sable Chemicals should brace for huge demand of fertiliser anchored on the success of the Government’s specialised grain production programme, commonly known as Command Agriculture.

“The success of the Command Agriculture programme for the 2016-17 framing season saw the annual demand of top dressing fertilisers rising to 110 000 metric tonnes for the summer cropping season alone,” said President Mnangagwa.

“With an expected annual increase of the cropping hectarage, this volume is bound to increase drastically and Sable Chemicals must stand ready to meet the demand.

“I am informed that Sable Chemicals is benefiting and dependent on the rail network for transportation of raw material, ammonia gas, as well as finished fertilisers. My Government has put in place concrete measures for more a efficient, reliable and modern rail network.”

“I applaud your recent initiatives to reinvigorate the production process by ceasing the electrolysis method to produce ammonia gas, thereby releasing approximately 90 megawatts of electricity into the national grid,” said President Mnangagwa.

“In addition, I commend Sable Chemicals’ long term plans to use coal bed or natural gas to produce ammonia gas which will be used to manufacture ammonium nitrate and urea, which will ultimately reduce the price of top dressing fertilisers.”

President Mnangagwa said the move was in line with Government’s policy of adding value and beneficiating the country’s natural resources.