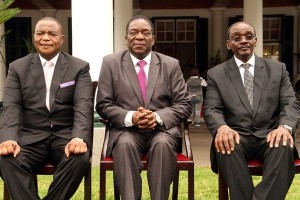 ZIMBABWE will in the next few weeks hold its post-Robert Mugabe era elections where more than 120 political parties will battle it out for the right to lead Zimbabwe ― a country described by Tanzania’s late leader Julius Nyerere as “Africa’s jewel”.

For a country that has repeatedly held sham and contested elections in the past 37 years resulting in economic decline and worsening living conditions for its citizens, credible and peaceful elections in 2018 will be key for economic revival.

Although President Emmerson Mnangagwa has repeatedly assured the nation and stakeholders that he will deliver credible, peaceful, free and fair elections monitored by international observers, he has a huge task of walking the talk.

The country is badly in need of foreign capital to revive infrastructure such as roads, railways, hospitals, schools, irrigation pipes and sewage systems among others, which all but collapsed under Mugabe’s rule.

The majority of Zimbabweans who are unemployed and live on less than $2 a day are hoping and praying for credible elections, whose outcome will determine whether the international community will fully embrace the new government born out of the plebiscite.

It is, therefore, crucial that the polls are conducted in an atmosphere that is deemed to be free, fair and credible.

This will not only help the country attract much-needed foreign direct investment to revive industries and other critical aspects of the economy such as agriculture, construction, banking, tourism and mining among others, but also take Zimbabwe to the road of prosperity.

The expected influx of foreign funding would be a step towards boosting business confidence, and a move towards the possible de-dollarisation of the economy.

In recent years, economic activity has been hampered by a lack of liquidity ― a problem we believe will disappear overnight if the elections are not contested.

History has shown us that we live in a world where democracy goes along with wealth: The richer countries are more democratic, and the transfer of democratic institutions has been from the rich to the poor.

There is a positive correlation between democracy and wealth distribution. In the most meticulous and comprehensive statistical examination yet of the relationship between democracy and development, Adam Przeworski et al (2000) provided compelling evidence for a hunch long held by observers of development.
If Zimbabwe is to become a middle-income country by 2030 ― as propounded by the Mnangagwa administration ― then it is critical that Zimbabwe gets the election right.