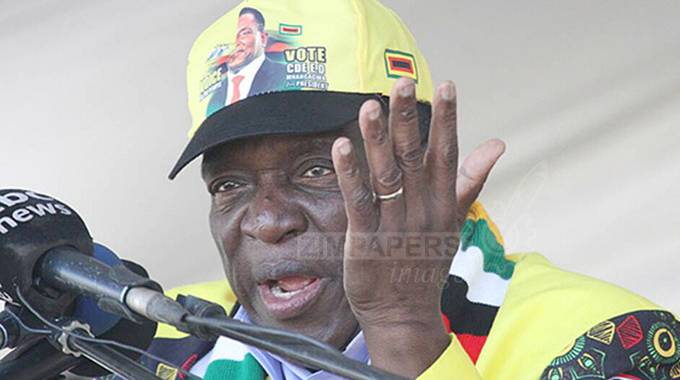 There is an important issue that President Mnangagwa pronounced himself on — for the first time — over the weekend, that has unfortunately been overshadowed by the terror attack at White City Stadium in Bulawayo.

In both Matabeleland South and Bulawayo rallies on Friday and Saturday, President Mnangagwa revealed that Government would soon implement  devolution.

Devolution of power refers to a system whereby central government cedes some of its powers to provincial councils so they can determine their development priorities.

Under a devolved state, each province will have its own economic development plan underpinned by resources found in that province.

Devolution is provided for in Zimbabwe’s Constitution under section 264 that deals with ‘Devolution of governmental powers and responsibilities’.

The announcement by President Mnangagwa is significant in many respects.

First, it tells us that President Mnangagwa respects the Constitution as devolution has been topical in some sectors though it needs to be emphasised that it is not synonymous with secession.

This signifies an important change in the course and governance of Zimbabwe as provinces will make relevant and timely decisions for their own development.

Decision making will be easier and expedient while regions will feel more in control of their destinies.

This, in turn, will translate into spurred growth with focused use of local resources both natural and human.

In the long term, provincial centres will develop and stymie resource outflows, which for long have been the situation for many areas of the country.

Second, and in this connection, President Mnangagwa made an important intervention in revealing that provincial ministers will now focus on the economy rather than being mere political figureheads given to parroting slogans.

There will be need to change the calibre of provincial leaders to suit the economic growth paradigm.

Provincial leaders will need to have the capacity to run economies with efficiency, just so they can sustain themselves and contribute towards the overall State development.

Third, President has just taken the stuffing out of what had hitherto been political football with opposition parties and other fringe outfits using the devolution narrative for narrow, emotional and misleading purposes that bordered on the idea of creating tribal enclaves.

This means that from now, this is going to be a national narrative.

It is going to be the big, governing idea.

It won’t be misappropriated by secession-minded political pretenders.

However, devolution will not come cheap.

It will cost money to set up provincial councils and ensuring that functions of central government that are devolved get operational.

Zimbabwe is not cash flush.

This, however, places emphasis on the need for provincial leaders to come up with plans that are bankable and can attract investors.

The best provincial leaders will make use of the resources available to lift people out of poverty and this will apply countrywide.

Conceivably, central government will play a facilitative and administrative role in allowing provinces to chart their preferred courses.

It will be a new paradigm indeed.