AS the circus and confusion with regards to the junior doctors’ strike continues unabated, it is time government shows sincerity to both the disgruntled medical practitioners and the general public. 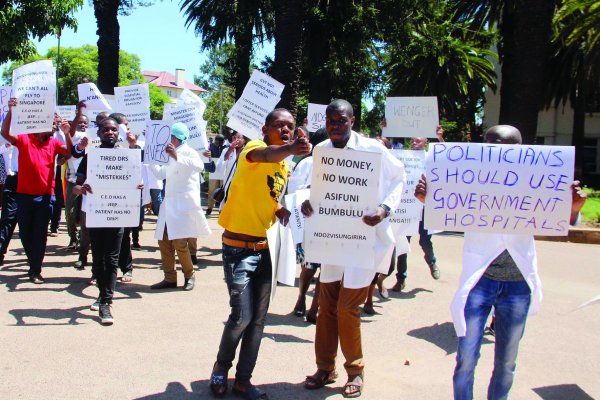 We believe instead of applying bullying tactics and blackmailing the striking health professionals, government should genuinely seek to understand their grievances and commit to resolve them. Again, it serves no purpose for government officials to rush to the Press to announce that the doctors have agreed to resume their duties when thorny issues which gave birth to the industrial action, are still pending.

It’s no longer time to play blame or hide-and-seek games as the month-long stalemate has contributed to cause innumerable deaths, which would have been avoided had the parties quickly found each other and resolved their differences.

For once, let the truth and common sense prevail. And this includes government providing the critical drugs and equipment that it has consistently ignored.

The majority of Zimbabweans depend on the woefully underfunded health system and, as a result, health workers watch helplessly as patients die of diseases that can be easily treated.

Some of the doctors’ demands on remuneration resonate with almost all public servants and the rest of the working public, whose earnings are undeniably no longer sustainable at the current rate of inflation in the country.

While doctors’ demands might sound ridiculous, they need not be dismissed at face value, as most of them serve to just remind government of its skewed priorities.

For instance, our government is signatory to the Abuja Declaration that obliges it to allocate at least 15% of the national budget to the health sector, but year after year, we find our health sector sustained by donor funding, as Treasury seems oblivious of the need to prioritise health issues.

There is a growing and worrisome tendency to deliberately underfund the health hoping that the donor community will always chip in on humanitarian grounds.

How else can government explain this, given most top bureaucrats, including members of the Presidium, prefer to outsource their healthcare needs, while the majority are made to make-do with the archaic system?

This only confirms that our leadership has no confidence in our local health system.

The issue of health funding is of paramount importance. Living is an inalienable right provided in the Bill of Rights and government should guarantee that, otherwise, it is guilty of denying its citizens that right.

The high disease burden from preventable diseases — such as the cholera and typhoid outbreaks, which wreaked havoc in most urban centres last year — is characteristic of inadequate health funding.

The strike, therefore, is a wake-up call to President Emmerson Mnangagwa’s second republic to revisit its health policy and budget priorities.