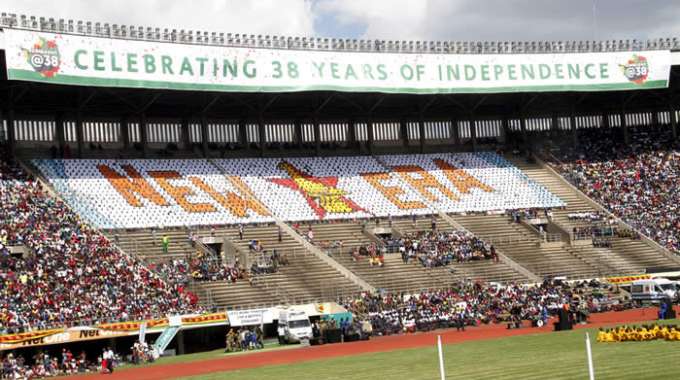 These were the bold words from President Mnangagwa in his speech to mark the 38th independence anniversary celebrations at the National Sports Stadium yesterday.

The speech was far reaching and touched especially on the gigantic progress made since Operation Restore Legacy in November last year.

The speech demonstrated that President Mnangagwa is already thinking big about the country and has already implemented some of the initiatives that will take Zimbabwe forward.

But the lingering questions which beg for crucial answers are: Are we all on the same page with the President? Are we all thinking big about transforming our situation from poverty into prosperity? Are we all changing our mindsets from the negative to the positive?

Well, the fact is that the President alone can only do so much and Zimbabwe needs everyone’s effort to transform the economy.

It is time everyone put their shoulders to the wheel. President Mnangagwa is playing his leadership role in every facet of the economy, and the officials he is working with and the people in general should lend him their support.

We have seen what unity of purpose can achieve within the shortest time possible. The analysis delivered to the people by President Mnangagwa in his independence celebrations speech should jostle all of us into hard thinking.

Not only hard thinking, but thinking big for the country, starting at the individual level. What has transpired since November is a sure sign that as a people, we are capable of changing our situation for the better if we put all our efforts and work together.

The days of spoilers — those who say the opposite when it is clear that the people are now determined to change their situation — are clearly numbered.

This is why we believe that giving President Mnangagwa a chance to continue with the path of economic reform he has started will be crucial come harmonised elections in a few months’ time.

President Mnangagwa has opened up the country to the world with his “Zimbabwe is open for business” pitch.

He has shown that like China’s Deng Xiaoping he doesn’t mind the colour of the cat as long as it catches the mice.

That is why re-engagement with the West is starting to bear fruit, while at the same time relations with eastern nations such as China and Russia are being elevated to the highest level.

Investment knows no boundary, so long as we are organised and our laws, rules and regulations governing operations of the investors are clear.

The MDC-T’s controversial leader Mr Nelson Chamisa seems keen to spoil it for everyone by his endless threats of violence if he doesn’t get his way. And he appears to have a club of preferred investors where President Mnangagwa is inclusive.

Investors need to be assured of security and the opposition leader appears unstable at the moment, obsessed only with power.

President Mnangagwa has so far demonstrated that he has the country at heart and prosperity of the people is uppermost in his mind.

In his speech, the President pointed out that the economy is set to grow by 4,5 percent this year from 3,7 percent last year due to the positive performance in agriculture, mining, tourism and construction sectors.

Command Agriculture is expected to continue providing food security and rejuvenate agro-value chain industries. Laws and policies are being put in place to enable ease of doing business for investors.

With President Mnangagwa at the helm, Zimbabweans can indeed dare to dream big again; they can now face the future with boldness.