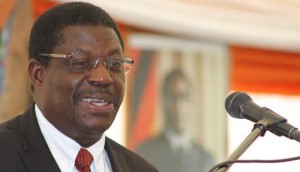 WHILE the nation was preoccupied with Monday’s high political drama, Industry Minister Mike Bimha made an announcement with probably farther-reaching implications than the latest sacking of a vice president by President Robert Mugabe.

Government has placed 16 basic products, mostly foodstuffs, on a “pricing and availability monitoring list”.
The surprise, if there is any, is not that government has done this.

The surprise is that anyone would believe this to have a different outcome from the last time such ham-fisted interventions triggered economic chaos.

Since the September price surge, government has telegraphed its intentions to approach this economic reality through the best way it knows how — controls.

We, once again, found ourselves on this path the moment government set up an “inter-ministerial committee to probe the reasons behind price increases.”

In 2007, it was a “price monitoring and stabilisation taskforce” that wreaked havoc and triggered widespread shortages as it enforced controls.

Government’s latest taskforce on factors behind ongoing price increases need not look further than its voracious self.

Five years ago, local banks held an average US$300 million per month in foreign currency bank notes, the equivalent of 10 percent of total deposits . Government securities were around $200 million.

The latest available central bank data shows that physical foreign currency holdings reached a low of just over $40 million last August, less than 0,6 percent of total deposits and a far cry from the internationally accepted 10-15 percent range. Startlingly, government securities that banks hold have vaulted above $2 billion, ten times the level in August 2012.

It is this surge in government’s consumptive borrowing that has spawned inflation by throttling the productive sector and exacerbating import pressure.

Although Bimha couched his Monday price monitoring announcement in innocuous sounding terms  describing it as “an effort to safeguard consumer rights”  Zimbabweans know better than most, how sensitive the market is to official interventions on pricing.

Government seems to think that the centralised forex allocation on a priority list determined by bureaucrats guarantees an efficient market.
It does not.

In any case, producers of major basic products such as edible oils are only getting up to 40 percent of their forex requirements through the formal system.

The rest is being sourced from the informal market where the local currency, such as it is, is significantly discounted to the United States dollar.

These are the realities which government needs to confront.

Any attempt to interfere with the workings of the market, under whatever guise, will not work.