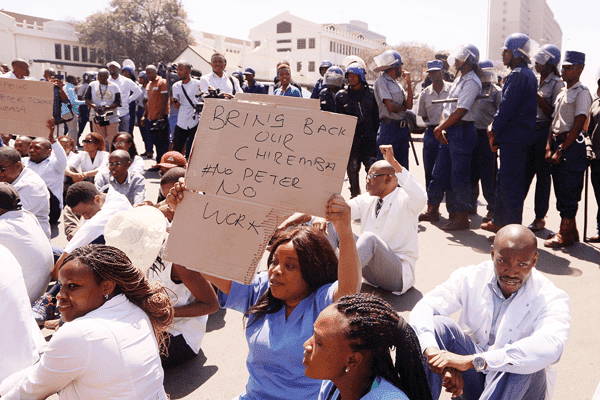 NEWS that the country’s doctors have spanned an offer by business tycoon, Strive Masiyiwa, is depressing as it is curious. In fact, the whole debacle speaks to the major problem facing this country: Incapacity. As much as Masiyiwa’s offer is welcome, rare as it is in a country replete with filthy rich individuals, it does not even get near to solving the crisis the doctors are at pains to show the government. Masiyiwa’s offer merely serves to assuage a gaping salary hole, but falls short of making the doctors’ profession enjoyable. Even if the doctors were offered US-dollar salaries, we would doubt if they would still accept it because what we are reading from this debacle is that the doctors want more than just better salaries, they are also pushing government to equip and stock up hospitals with modern machinery and lifesaving drugs.

And sadly government is missing this point and only concentrating on getting the doctors to go back to work. Go back, yes they may with all the money getting into their pockets, but they know they will be of little service to the dying people of Zimbabwe. Accepting Masiyiwa’s offer would be mercenary; that is what we are picking from their argument. This means that government has to get its priorities right. The fact that top government officials are not even taking the country’s hospitals as an option when they fall ill speaks volumes of our public health delivery system. We, arguably, have some of the best doctors in the region, but they count for nothing when they have no equipment or drugs to work with. These brilliant and dedicated workers count for nothing if the leaders of this country continue to shun the institutions they work in. Our hospitals need a complete overhaul in terms of equipment and complete restocking of all essential drugs to make the doctors’ profession worthwhile. As it is, they cannot be forced to return to work to watch people die simply because there is nothing to save them.

Zimbabwe must be the only country in the entire world where leaders force doctors and nurses to work in hospitals and clinics they do not go to for treatment. So it is high time well-meaning donors such as Masiyiwa come to understand the situation and dynamics of the complex issues surrounding the doctors’ strike. Before donors and investors as well decide to get involved with Zimbabwe, they also need to understand the complex nature of Zimbabwe’s economy which has been gnawed to bare bones by corruption; lest they pour their money into a bottomless pit.