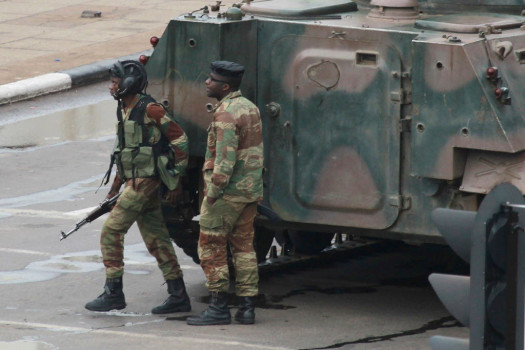 In the historical legend of how human beings have tried to obtain extra-ordinary powers, wealth and influence there is the folklore story of Dr Faustus who is said to have struck a bargain with the devil. This is now referred to as the infamous Faustian pact. Fast forward this to Zimbabwe’s fast moving political events just after Robert Mugabe fired his then Deputy President, Emmerson Mnangagwa who immediately hinted he will be back in a matter of weeks. Indeed, this came to pass, but not before tanks, guns and gunpowder was involved. Yet, since that ‘smart’ coup of November 2017 and the disputed election of July 2018, political events have moved quickly in Zimbabwe. It is becoming clearer that for the then Deputy President to come back he had to strike a deal with various factionalists in the Zimbabwe African National Union-Patriotic Front (ZANU PF) and importantly with the army generals who were increasingly feeling insecure about their future under Robert Mugabe. The bargain went further and roped in South Africa and other global superpowers global players like the UK and China who wanted to see the back of Mugabe. Internally the new President had to strike a bargain by parcelling off powerful positions to the men and women in the army, especially appointing them to cabinet and dishing out Ambassadorships. That bargain included carting off the old nationalists to the party positions in the Stalinist like Politburo yet reserving the powerful position of Political Commissar to the military men. Although “ED” walked into state house after all these bargains, it seems the melting political economy is now making these backroom deals look like the proverbial ‘sailor’s weight’ that will sink his Presidency.

The political economy situation in Zimbabwe continues on a downward spiral. Measured against any metric that one can conjure up things are looking really bad. Yet, against this evidence the President’s social media messaging continues on a very parallel universe with posts disconnected from the reality in the country. And to top this off, the political elite continue hammering on a political dialogue that can only be summed up as a pre-emptive but chimerical pretence on the much-needed comprehensive dialogue. Firstly, the labour unions have re-started negotiations with the government which is the largest employer and the government has very little room to cushion the over a half a million workforce. Secondly, in the private sector banking employees have started demanding for the review of their salaries to match the rise in inflation and this is most likely to be a demand from other unions and workers. Thirdly, inflation has started marching up with no restrain and this means that people’s incomes are being eroded and prices have been rising at alarming levels. Fourthly, the government has started a full scale crackdown on political and human rights activists. Add to this matrix that the MDC Alliance has completed its congress and now they have turned full scale to face the ruling political class. The combination of these factors are mixing up a very explosive situation and if the citizen does not revolt early enough there is a very chilling prospect that there will be a real coup in Zimbabwe this time around.

The coup beneficiary President has shuffled and reshuffled police commanders around, has ‘managed’ to slowly purge military commanders and has so far pacified the out of control intelligence services which Mugabe depended on. Some military commanders were promoted internally, some appointed into the government directly as Ministers, some as Ambassadors and some of them have become senior bureaucrats across the party and the civil service. But one thing is common here. The military senior officers have become ‘shareholders’ and in that sense have worked through the economic system to become an autocratic-crony capitalist class. The senior military officers are well taken care of and their rotund bellies says it all. They have lucrative farms, some have mining claims, involved in diamond mining, some are ‘silent’ partners in many contracting businesses and they have built mansions in Northern Harare. They have become a network of parasites on the economy and they are living plush lives of chartered jets, foreign hospitals and enjoying kickbacks from the cartels that span through the foreign currency dealing and the petroleum industries. In a word they don’t pay for anything at all. The Rhodesian farmer-settler and the colonial company capitalist class who used forced labour, plundered land and took over vast amounts of land will be green with envy.

What the military strategists are not paying attention to is that as the military changes and is re-configured to meet the loyalty of the new emperor this is building dissent in the ‘officers’ mess’ as the saying goes. Add this disgruntlement to the rising temperature and social discontent this can eventually whip up the junior officers out of the barracks into a real non-cosmetic coup. And coups that are conducted by junior officers can be very messy and bloody business. A messy coup often involves the rounding up, arrest, detention, torture and even execution of the top elites of the political class. In Ghana when Jerry Rawlings took over a few of the elites were executed, in Nigeria’s coup and counter coups often top political elites were executed; same goes in historical revolutions like the French revolution, the Bolshevik Revolution and the Chinese-Maoist Revolution. But the bloodbath will not stop there. If the barracks are not united, with no central command, there will be countermanding of orders, other security services will join in, and in that melee little war lords controlling different operational zones will emerge. The state will have collapsed. By bringing back the military into the factional contest of power in ZANU PF and in the country’s political-electoral landscape the floods has been opened and the junior officers are now on the loose. Sudan has become the latest state to have soldiers go haywire and there are claims or a coup, counter-coups and in that scenario it is the constitutional republic that gets buried. In our case, we need to watch the Commando Barracks and the Presidential Guard closely, for we might have now entered the era in which ‘the gun now commands politics’ and ‘soldiers without ideology’ reign supreme – mercenaries.