EU to report on Zimbabwe election as country awaits results 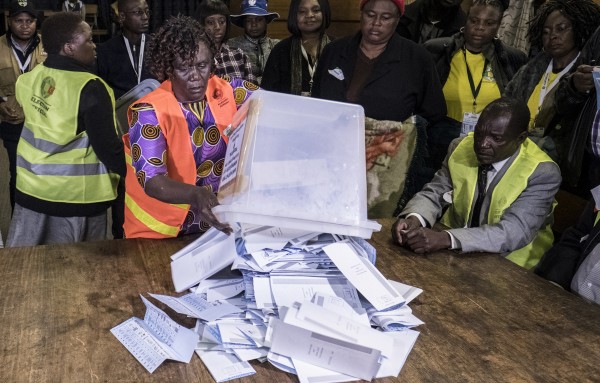 On Wednesday the European Union’s electoral monitoring team is due to deliver its much-anticipated report on the conduct of the campaign, the polls and counting processes.

File: Election officials empty a presidential candidates ballot box onto a table during counting operations for Zimbabwe’s general election. Photo: AFP / Marco Longari
HARARE – EU observers are expected to give their report on Zimbabwe’s presidential election on Wednesday as the country waits impatiently for results of the first vote since Robert Mugabe was ousted after 37 years in power.The opposition MDC party on Tuesday claimed victory for its candidate Nelson Chamisa in the historic ballot while the government threatened to jail leaders announcing results before the official tally.

Electoral officials warned that gathering the results of Monday’s poll, which President Emmerson Mnangagwa said looked “extremely positive” for him, was “nowhere near” complete and no announcement would be made until as late as Saturday.

The candidates’ competing claims following the first elections since former president Mugabe was ousted in November raise the prospect of fraud allegations and a possible run-off vote on 8 September.

That would be required if no candidate wins at least 50 percent of the ballots cast by Zimbabwe’s 5.6 million voters in the first round.

With elections under Mugabe marred by fraud and often deadly violence, Mnangagwa promised a free and fair vote and invited international observers.

On Wednesday, the European Union’s electoral monitoring team is due to deliver its much-anticipated report on the conduct of the campaign, the polls and counting processes.

Their findings will be an important verdict on Mnangagwa, who has staked his reputation on delivering credible polls.

“There are shortcomings that we have to check. We don’t know yet whether it was a pattern,” the EU’s chief observer Elmar Brok told AFP during voting on Monday.

Observers from the Southern African Development Community and the African Union will also deliver reports on the polls.