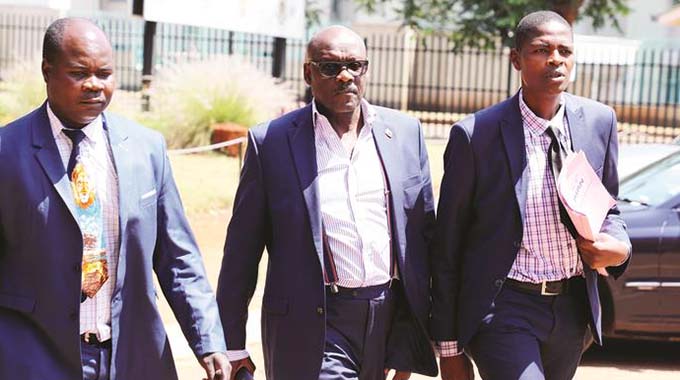 Parirenyatwa was not asked to plead to criminal abuse of office charges as defined in Section 174 (1) (a) of the Criminal Law (Codification and Reform) Act Chapter 9:23, when he appeared before Harare magistrate Mr Elisha Singano.

The State, led by prosecutor Mr Michael Reza, did not oppose bail, but proposed that Parirenyatwa pay $1 000 coupled with stringent conditions.

Mr Singano reduced the bail to $500 and remanded Parirenyatwa to October 26.

Parirenyatwa (68) was required, as part of his bail conditions, to surrender his passport to the Clerk of Court and to report twice a week – on Mondays and Fridays – at the Criminal Investigations Department, Anti-Corruption Unit, Morris Depot.

He was also ordered not to interfere with State witnesses and to reside at his given address until the matter is finalised.

Charges against Parirenyatwa arose on June 4 this year when he was still Minister of Health and Child Care.

He allegedly abused his position as a public officer and directed NatPharm board chairperson Dr George Washaya to terminate the contract of Ms Flora Sifeku as managing director, allegedly showing favour for Mr Newman Madzikwa, who had once been sacked from the pharmaceutical company for reportedly selling donated drugs.

At the time he was fired in September 2009, Mr Madzikwa was NatPharm’s Masvingo branch manager.

The indictment also revealed that Parirenyatwa had indicated that he required Ms Sifeku’s services at the ministry’s head office for an indefinite  period.

The board, it is alleged, complied with the former minister’s directive and gave Ms Sifeku and Mr Madzikwa six months contracts each as managing directors effective June 1 to November 30 this year.

It is alleged that Parirenyatwa’s conduct created double dipping on NatPharm funds as the company was paying two salaries towards the managing director’s position, thereby prejudicing it of a total of $30 006.

The crime allegedly came to light through a tip-off this week, leading to the former minister’s arrest yesterday.

The State further alleges that Parirenyatwa’s actions were prejudicial to the good administration of NatPharm and the Ministry of Health and Child Care.

The former minister, who is being represented by Mr James Makiya of Makiya & Partners Legal Practitioners, was dropped when President Mnangagwa announced his new Cabinet on Monday this   week.

President Mnangagwa has made the fight against corruption a key policy plank. Former energy minister Samuel Undenge was recently arrested for criminal abuse of office during his tenure and convicted.

Other former ministers who have been arrested are Ignatius Chombo, Walter Mzembi and Saviour Kasukuwere.