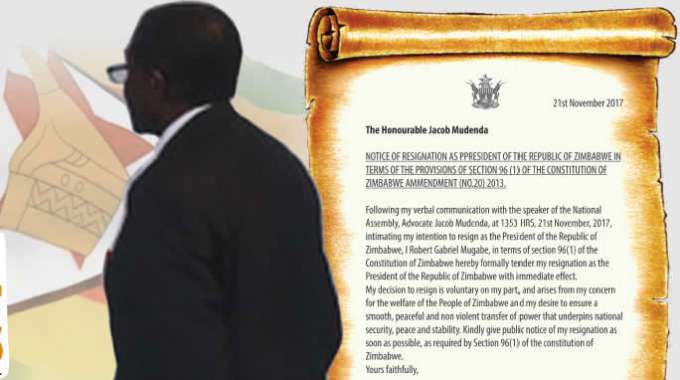 Legal and political experts have slammed former President Robert Mugabe, saying his utterance before foreign journalists at his house in Harare on Thursday suggesting a coup were illogical, as the 94 year old resigned out of his own volition. Mr Mugabe, whose wife Grace had performed a “bedroom coup”, claimed President Mnangagwa’s rise to power was illegal. He begged for a meeting with President Mnangagwa and also highlighted how Mrs Mugabe housed the G40 cabal, including Jonathan Moyo and Saviour Kasukuwere at his Blue Roof mansion in Borrowdale when the Zimbabwe Defence Forces launched Operation Restore Legacy in November last year.

Mr Mugabe confessed that his wife played a key role in ensuring Prof Moyo and Kasukuwere fled the country. This is contrary to claims by Prof Moyo when he told the BBC last year that: “We didn’t seek refuge at Mugabe’s house”.

Mr Mugabe told journalists on Thursday that Prof Moyo and Kasukuwere phoned Grace “crying mama, mama please save us and we took them in”.

A legal expert Advocate Thabani Mpofu told ZBC last night that it was illogical for Mr Mugabe to say he was deposed through a coup de tat.

He said President Mnangagwa was duly inaugurated by the honourable Chief Justice of the Republic of Zimbabwe. Adv Mpofu’s sentiments were supported by political analyst Mr Tinei Zawanda, who equated Mr Mugabe’s ranting to day-dreaming, saying his call for dialogue should be read in the context of the lapse of the extension given to looters and externalisers.

‘‘Mugabe clearly wants to meet and talk to President Mnangagwa for selfish, personal ends relating to his family’s assets and wealth. The timing of the media stunt and the call for dialogue can not be separated from President Mnangagwa’s intention to name and shame looters, ‘‘ Mr Zawanda said.

Another political analyst, who spoke on condition of anonymity, concurred with Mr Zawanda.

“He is obviously scared of that warning and that is why he is now begging President Mnangagwa for talks,” said the analyst.

“It is a known fact that Mugabe and his family have properties outside the country and are reluctant to repatriate that which they externalised. The clock is ticking and he is running scared, yet in public he feigns bravery.”

The international community from the regional blocs SADC, the African Union and the United Nations commended Zimbabwe for a peaceful transition and the peaceful protests of the 18th of November last year and the subsequent resignation by Mugabe becoming a test case for the whole world. – Herald/ZBC.