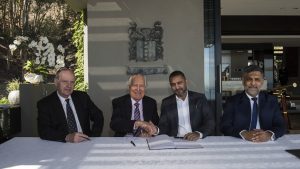 The British peer and anti-corruption campaigner, who spoke out against state capture, is doing business with some controversial characters.

Peter Hain, a British peer made headlines in South Africa when he campaigned against state capture. But Lord Hain does not appear to be applying the same high standards to his own commercial dealings in Zimbabwe, as an examination of his business partners reveals.

The peer himself admits that he is now working directly with senior officials “complicit” in former President Robert Mugabe’s dictatorial regime.

Both men are the subject of targeted sanctions by the United States, imposed in the early 2000s, which claims that they were involved in efforts “to undermine Zimbabwe’s democratic processes or institutions” and “acts of violence and other human rights abuses against political opponents”.

Hain’s Zimbabwean connections run through a controversial and flamboyant South African businessperson, Zunaid Moti. The 44-year-old owns several luxury properties in South Africa and is said to be so worried about personal security that his children go to their Johannesburg school with bodyguards.

Moti and now Hain are also indirectly in business with the Zimbabwean Defence Force, which has a long and well-documented history of human rights abuses and corruption, and Sakunda Holdings, a fuel distribution company embroiled in corruption scandals and with close links to the ruling party.

Zimbabwe’s Parliament is investigating Sakunda Holdings in relation to alleged impropriety in the financing of the government’s Command Agriculture scheme.

Hain did not respond to the specific questions posed to him by the Mail & Guardian and amaBhungane, but said his new business partners have turned over a new leaf.

“Some of those who were senior figures in Mugabe’s dictatorial regime, though clearly directly complicit, are part of the current transition and are promising a better economic and human rights future under better governance.”

Last month, Hain announced an “alliance” with Moti, who is chairperson of the Moti Group. Hain confirmed that this was a “commercial relationship” but refused to disclose how much he was being paid.

Moti understands that he has a poor reputation and that he brought Hain on board in part to “change the media perception of us”.

Moti is no stranger to scandal.

Most recently, Interpol issued an international arrest warrant for him and several associates. They were wanted for fraud in Lebanon, after a mining deal with a Russian businessperson went sour.

Although these arrest warrants were confirmed in a South African court in August last year, Moti says they have been withdrawn. Neither Interpol nor the South African Police Service responded to requests to confirm this.

In 2008, his company, FinFuture, was denied a licence to provide financial services because it failed to meet the “fit and proper” requirements. He ran up debts of R1.5- billion with Investec in 2010, eventually reaching a settlement deal.

In 2011, Moti and his associates were charged in relation to a violent attack on businessperson Naeem Cassim. The charges were later dropped.

Hain said he had been reassured by his close friend, forensic investigator Paul O’Sullivan, who gave Moti and the Moti Group a clean bill of health.

O’Sullivan, who once described Moti as a “gangster” and a “thug”, conveyed the same message to the Mail & Guardian.

O’Sullivan said he had done extensive due diligence on the Moti Group’s operations and was satisfied that they are above board.

Hain agreed to lend his expertise to Moti’s Zimbabwean businesses, in particular African Chrome Fields (ACF), of which Hain is now an ex-officio board member. Sakunda Holdings is a 30% shareholder in ACF, and the company is operating a joint venture with the Zimbabwean Defence Force.

ACF has a mine in Mnangagwa’s former constituency, Chirumanzu- Zibagwe, where he was the elected representative, until 2014, when he was appointed vice-president. His wife, Auxilia Mnangagwa, is now the MP for the area.

Moti boasts of his close relationship with Mnangagwa, although he insists that it did not give his businesses any undue advantage.

“We started to understand Zimbabwe as a Mnangagwa investment, because he was there guiding us in the investment and policies.”

The Moti Group also enjoys a close relationship with Chiwenga — so close that the Moti Group even paid R52,890 for the then-army boss to stay at the exclusive Michelangelo Hotel in Sandton City for four nights in May 2015.

Chiwenga and his entourage occupied two rooms at a cost of R6,611.25 a room a night.

This information was revealed in the trove of #GuptaLeaks emails, which include an invoice statement from a South African travel agency. The invoice, addressed to Akzam Professional Management Services, a subsidiary of the Moti Group, includes the charge for “Chiwenga”.

A Moti Group spokesperson, Natalie Graaff, confirmed the details of Chiwenga’s stay but insisted that it was part of a normal business arrangement and that the charge was subsequently settled by the Zimbabwean government.

Graaff also said the inclusion of the invoice in the #GuptaLeaks trove was in error, and that there is no connection between the Moti Group and the Guptas.

The Moti Group insists that this booking was above board but their response suggests a regular pattern of paying for the expenses of Zimbabwean government officials.

“These disbursements are all properly recorded and charged out accordingly and fully accounted for between the parties. It is the government of Zimbabwe, not ourselves, that choose and decide on such offsets,” Graaff said.

“We merely facilitated the arrangements and are most surprised that you would seek to draw the wrong inferences from such arrangement,” she added.

Chiwenga’s business trip coincided with his graduation from the University of KwaZulu-Natal a few days later on May 9. He was awarded a PhD in philosophy and ethics.
Soldiers in suits

Before the general’s tour of the Moti Group’s South African operations, the company’s Zimbabwean mining operations, situated along the Great Dyke in the Midlands province, were officially commissioned by Mugabe.

Mnangagwa and Chiwenga were among a raft of senior Zimbabwean government officials also present at the commissioning ceremony in March 2015.

ACF was awarded “national project status” by the government at about the same time. This helped set the company up to receive a duty-free fuel importation certificate the following year.

In April 2015 — a month before Chiwenga’s South Africa trip — ACF became involved in a joint venture for a chrome-smelting project with the Zimbabwean Ministry of Defence.

According to Graaff, ACF was contracted to assess, explore and mine alluvial chrome resources for an agreed fee: “The contract with ACF relates to contract mining on claims belonging to the Zimbabwean government through the specific ministry.” 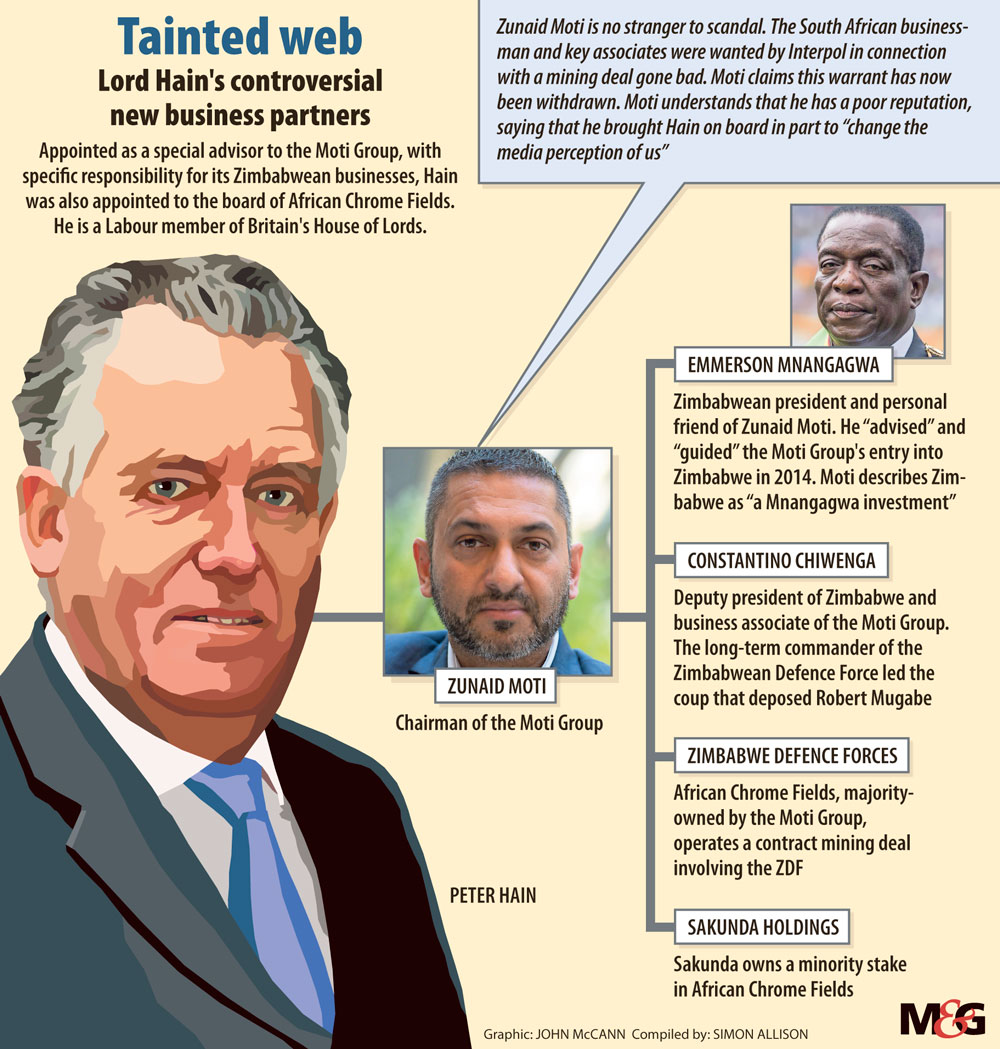 Hain insists that his motivation for working with the Moti Group and its Zimbabwean business partners are pure.

“My two-weeks new role with the Moti Group, a key business there, is partly to assist the process whereby Zimbabwe turns away from its Mugabe past and is liberated from poverty, state-sponsored corruption and oppression.

“I have been assured that the Moti Group is pursuing the same objectives and will stay involved as its special adviser whilst that remains the case,” he said.

“Given Lord Hain’s strident promotion of accountability and transparency in relation to the behaviour of British businesses with the controversial Gupta family in South Africa, one would hope to see a similar standard applied to his business associates’ engagement with Zimbabwe’s military and political leadership,” said Piers Pigou, Southern Africa director for the International Crisis Group. — Additional reporting by Govan Whittles