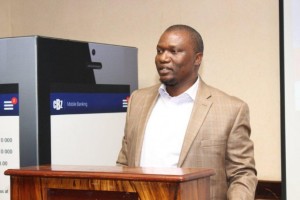 CBZ Holdings chief executive officer Never Nyemudzo bowed out of the bank this week after a period of sustained pressure, threats and extortion over a mysterious $2 million transaction involving government, sources at the country’s largest financial institution said yesterday.

Nyemudzo’s retirement, just three years after his appointment, came as a surprise. An outsider upon his 2014 appointment to succeed current Reserve Bank of Zimbabwe (RBZ) governor John Mangudya, few expected his tenure to be brief after Nyemdzo managed to lead CBZ to annual profits exceeding $30 million since then.

At the centre of Nyemudzo’s woes is a $2 million mystery transaction the banking group handled for government, a domineering CBZ shareholder. Over the years, the bank has handled sensitive, sanctions-busting transactions for President Robert Mugabe’s government , with the group’s chief executives assuming the unofficial role of banker to the first family.

In 2015, the bank handled an ill-fated $1,35 million diamond ring purchase transaction for First Lady Grace Mugabe, which is now the subject of a court case.

Well-placed sources at CBZ yesterday told The Financial Gazette that Nyemudzo’s woes started when an audit instigated by the National Social Security Authority (NSSA), a major shareholder in the banking group, was leaked by some of Nyemudzo’s senior management colleagues to elements within the state security establishment.

“The money was allegedly used by government and Never had nothing to do with the money,” one source said. However, the source added, Nyemudzo had come under pressure from some intelligence officials who sought to blackmail him over the transaction.

“They kept pressuring him to give them something, so he decided to resign,” the sources said.
Information gathered by this publication revealed that government explained the US$2 million transaction and assured Nyemudzo that he had nothing to worry about. This, however, did not stop the pressure.

Nyemudzo, whose relationship with his colleagues on the CBZ executive committee was described as strained, is reported to have been preparing for his exit over the past year. Sources said he had recently considered a position at a top Botswana bank a few months back.

CBZ corporate legal secretary Rumbidzayi Jakanani and group corporate affairs executive Laura Gwatiringa had not responded to questions sent to them concerning the audit by the time of going to print.
Peter Zimunya, who is currently the managing director at CBZ Bank, is now the group’s acting chief executive officer.