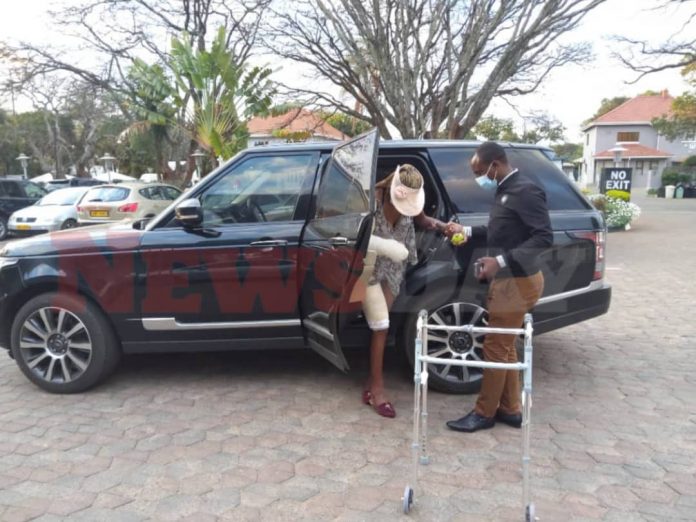 MARRY Mubaiwa, who’s facing several criminal charges, has been denied bail several times and the courts have refused to release her passport for her to seek treatment outside the country despite a serious illness.

Is her husband Vice-President Constantino Chiwenga behind the instrumentalisation of justice to settle a domestic dispute? Notable individuals linked to the Zanu PF regime have faced criminal charges before, but have seen their cases turned out differently.

For example, in June 2020, former Health minister Obadiah Moyo, who was implicated in a US$60 million tender scandal, was released on bail a day after his arrest; and in December 2019, former Tourism minister Priscah Mupfumira was declared mentally unstable, thus unable to stand trial for the US$95m pension funds scandal.

For Chiwenga’s wife Marry, however, the Judiciary seems to have changed tack.

Chiwenga and the 40-year-old Marry were customarily married in 2011, until they separated in December 2019.

Since then, the former military general has been blocking Marry from seeing their three children — two boys and a girl — as their divorce battle rages on.

Besides the divorce, Marry faces a myriad of criminal charges. Chiwenga accuses her of forging his signature on a marriage certificate in order to upgrade their customary marriage when he was critically ill.

She is also facing charges of attempting to kill Chiwenga in 2019 when he was hospitalised in South Africa. It is alleged that she tried to unplug his life-support machine.

The former model is also facing charges of fraud, money laundering and assaulting her children’s minder in January 2020, while trying to gain access to them at a top school in Borrowdale, Harare’s leafy suburb.

Marry has been visibly ill for months now. She is suffering from lymphoedema, which has caused swelling of her arms and legs.

Marry says, in court papers, that she developed this health problem in 2018 following the bombing of the high table at White City Stadium during a Zanu PF rally. President Emmerson Mnangagwa was reportedly the target.

Her deteriorating health has, however, not stopped her from being dragged to the courts. She would fall asleep during court sessions and even collapsed during her trial in the case where the Health minister is accusing her of forging his signature to upgrade their customary marriage.

The courts have refused to release Marry’s passport, which she says will enable her to seek treatment outside the country, amid reports that her bank accounts have also been frozen.

Beatrice Mtetwa, Marry’s attorney, tells The Africa Report that the Judiciary has been unfair to Marry.

“It has always been accepted that the right to a fair trial includes being physically and mentally fit, yet the court said she was fit for trial when the only court commissioned psychiatrist said she was not,” she says.

“Marry has been sleeping throughout the trial and the magistrate even drew our attention to this.”

Sitabile Dewa, the executive director for Women’s Academy for Leadership and Political Excellence, says Marry should be allowed to seek medical treatment abroad.

“While we are not medical practitioners, our sense of humanity informs us that Marry is visibly unwell and in need of medical attention, which may not be readily available in Zimbabwe. It is, therefore, in the best interest of her right to life that at a minimum she goes for treatment.”

Zimbabwe’s Judiciary system has long been suspected of being under the control of top Zanu PF and government officials.

The letter alleged that the judges were captured and unable to independently execute their duties without interference from the Executive and State agencies.

Mtetwa says the Judiciary has been captured throughout Marry’s cases, including on the issue of her access to her children.

“Whereas the High Court properly applied the law on the children’s issue, the Supreme Court reinvented the law.”

In 2020, a High Court judge granted Marry access to her three children, but the Supreme Court overturned the ruling after Chiwenga filed an appeal. The Supreme Court later nullified the lower court’s ruling, which had given Marry custody of the children.

It is rare for a mother to lose custody of her children under the Zimbabwean laws on minors.

Mtetwa says the principle of fair trial before an impartial and independent court is a total fuss in so far as Marry’s case is concerned.

“The entire trial has been conducted on a political and partial basis. Whatever the prosecution says carries the day.”

Farai Gwenhure, a political analyst, tells The Africa Report that it is a matter of the selective application of the law.

“TheVice-President is obviously being given preferential treatment. The law is being weaponised to fight a domestic dispute. Once the law is weaponised, it basically means that both the magistrate and the prosecutor are taking instructions from somewhere, we do not know where, but if you look at the rulings that they have been making, they were all dubious.

“It would be worrisome if parties used their proximity to State institutions to push these to settle personal challenges with their spouses.” — The Africa Report