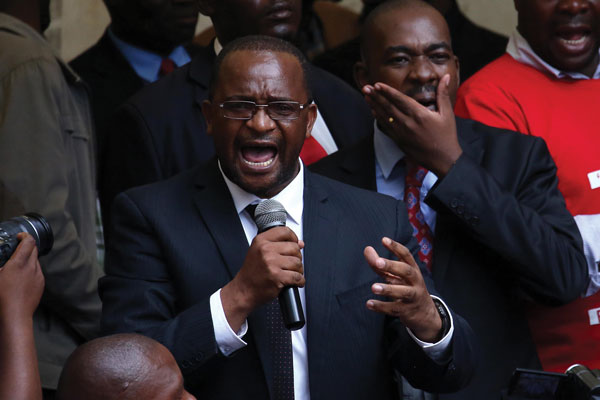 One of his “prophesies” came to pass when MDC-T leader Douglas Mwonzora last week wrote to the Zimbabwe Electoral Commission (Zec) to claim the MDC Alliance name and symbol in what analysts say was a well-choreographed assault, involving State institutions against then MDC Alliance leader Nelson Chamisa and his party.

The prophesy: Back on July 2020, Charamba opined that Chamisa would be left with no party, or control of the MDC Alliance name during an exchange with MDC Alliance secretary for elections, Jacob Mafume. Mafume, perhaps ill-advised, had mocked Zanu PF and its leaders for allegedly trying to create a coalition government with the MDC-T, then led by Thokozani Khupe.

Khupe had dumped her faction of the MDC-T after the Supreme Court ruled that the process that elevated Chamisa to the leadership of the party following the death of MDC founding father Morgan Tsvangirai, its founding president, was illegal.

As a result, she was the acting president at the time.

Charamba, in typically abrasive fashion, hit back at Mafume: “Except you have no party while pretending to be in organised opposition!!! Khupe amhanya nechinhu!! (she is now in the driving seat). Very soon you will be interdicted from using MDC-Anything!!! Watch the space!!!”

And since then, Chamisa has been fighting a losing battle over the MDC Alliance name and has watched as Mwonzora, aided by a compliant Parliament and the Local Government minister July Moyo, kicked out legislators and councillors loyal to him. Where the MDC-T failed to win a single elected legislative seat or local council position in the 2018 elections, the State and its arms gave Mwonzora control of MDC Alliance MPs and councillor.

Armed police and the military helped him seize control of the of the MDC Alliance headquarters and other offices countrywide.

President Emmerson Mnangagwa was taking no prisoners after Chamisa refused to recognise his electoral victory in 2018, and turned down his offer of ‘Leader of the Opposition’ in Parliament.

Chamisa was clearly a threat to his stranglehold on power.

National University of Science and Technology lecturer and analyst Methuseli Moyo said Chamisa did not need to have a party to show the massive support that he has.

Instead, Moyo said Chamisa was a party is his own right.

“When Charamba made those comments, he knew what was in store for Chamisa. So, technically and theoretically, Chamisa has no party but in reality Chamisa is the party because you can see that even Zanu PF, everything that they are doing is aimed at outcompeting Chamisa,” Moyo said.

“It somehow causes a bit of anxiety to Chamisa and his supporters but if you look at it from another angle, this also causes a lot of anxiety to the government, Zanu PF and the system because now they don’t know how to proceed. Even if he changed the name of his party to anything that is not MDC, I don’t think that would hamper his progress at all.”

Last week, Mwonzora said he would contest the March 26 by-elections as the MDC Alliance. Chamisa was elated: “I told you,” he tweeted.

Chamisa last week told party supporters not to panic after they quizzed him on the way forward regarding the party’s name and contesting the by-elections.

Analyst Rashweat Mukundu said Zimbabwe was witnessing a vicious attack against Chamisa in a manner akin to authoritarian states like Mymmar where pro-democracy movements are often suppressed.

“One can look at how State institutions have been mobilized, not only from the police (and the army) to assist Mwonzora to take over Harvest House (MDC headquarters), but also the very political judgments that would be laughable in any other part of the world which have been made against Chamisa and the Alliance in terms of its leadership, composition and the processes of electing such leaders,” Mukundu said.

“And we know very well when such matters were raised in the past against Zanu PF by disgruntled members, the courts were quick to say these were voluntary organisations but when it comes to the opposition, we actually see the weaponisation of legal processes.

“We are seeing the fulfilment of that vicious attack on the party which unfortunately reflects so much on how Zimbabwe remains an authoritarian regime because what we are seeing is a textbook copycat and anti-democracy approaches that we see in Mymmar, China, Iran and North Korea, where all pro-democracy movements are viciously suppressed.”

At the time, the CCC looked set to be an alternative name of a new coalition to be built around Chamisa.

The CCC secretary-general, one Farai Zhou claimed the party in a letter to the Zimbabwe Electoral Commission (Zec).

Zhou gave a post office box address in Buhera, and put down a Bulawayo law firm for all communications. But prominent Bulawayo lawyer Tavengwa Hara, who was listed as the party’s lawyer by Zhou, distanced himself from the CCC, giving credence to fears that this was a State-sponsored proxy. Exiled minister Jonathan Moyo had urged the MDC Alliance to legally register the CCC before Zhou claimed the party.

While odds remain stacked against Chamisa, A pro-Zanu PF political analyst Mlungisi Moyo argued the opposition leader was equally to blame in the dispute over the MDC Alliance name and symbols.

“You don’t need to be a rocket scientist to see the lack of cohesion in running party affairs by Chamisa. We can still go back to the time of (Morgan) Tsvangirai. He was a bit clever because he ended up coining his own MDC-T after Welshman Ncube had taken the MDC party away from him,” Moyo said.

“To me, Charamba was metaphorically saying that the rate this gentleman was going; the failure to observe their party constitution will lead to him not having a party per-ser. He has tried to fight this, but because of lack of organisation, he has lost these court battles. It was just a political analyst foretelling what would happen if he (Chamisa) does not observe the constitution.”

But analyst Effie Ncube argued otherwise, and said Zanu PF did not believe in multi-party democracy.

“The events around the MDC Alliance were predictable as early as just after the 2018 disputed election. It was as clear as a bright shiny day that Zanu PF was going to do everything it could to destroy the MDC Alliance as part of its war against democracy and democratic accountability,” Ncube said.

“Zanu PF cannot and will never coexist with a strong opposition. Its tenets tend towards a totalitarian one-party state that does not accept organised dissenting voices, be they political and civic. The MDC Alliance that was established to challenge Zanu PF is exactly the sort of movement Zanu PF cannot co-exist with.”

Charamba last year said Zanu PF would not hand over power to Chamisa, under any circumstances.

Chamisa’s only way out?

The alternative for Chamisa, according to analysts, was to enlist the very military that has been propping up Zanu PF.

“Unlike in the past, when the military lurked in the shadows of politics, in the “post-coup” era the Zimbabwean Defence Forces (ZDF) are now openly involved in all aspects of politics,” noted Chipo Denhere, assistant Professor Africana Studies, Political Science, at Wellesley College in Massachusetts, the United States.

One reason for this was that the army’s financial interests were directly tied to Zanu PF’s political survival. Security sectors, she said, often depend on national budgets for the allocation of resources.

“The military is too strong to be defeated through force. This means that the opposition will have to persuade the military rank-and-file they will be better off in a better-performing economy under Chamisa, while assuring the top brass that their interests — economic and all — will be secure in a post Zanu PF world,” Denhere says.

Newer Post
Rains Finally Come, And So Do the Rodents
Older Post
Biti, 5 others bounce back in Parliament