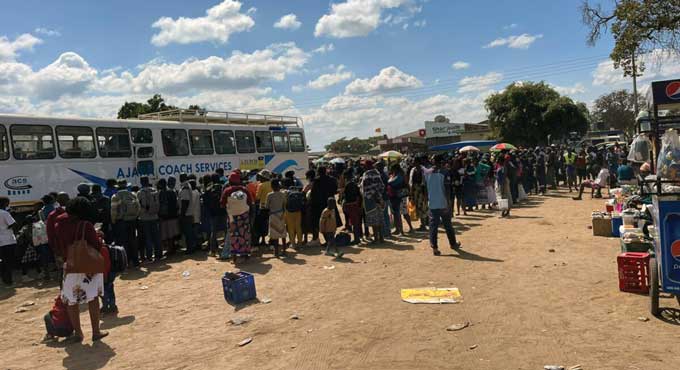 Troubled by the assassination of a South African veteran of the anti-apartheid struggle, Chris Hani, by radical right-wing Polish immigrant Janusz Waluś on April 10, 1993, Zimbabwean poet Albert Nyathi penned his own rendition of Senzeni na?

Despite using a different melody and altered lyrics, Nyathi’s song is gravid with emotion, questioning the existence of injustice, the façade of peace, and the unpitying slaying of Africa’s most gallant sons. The song is pertinent today as it was in the 1950s.

The ordinary man in the street today replays the song in his heart as the country’s teething troubles continue to bite.

While standing in long and winding queues for more than two hours waiting for public transport at Harare’s main bus terminuses, Copacabana, Market Square, and Fourth Street, one cannot help but question what he or she did to be in such a predicament.

In the queues, one comes across the visibly infirm, the grey-haired, and those living with disabilities dejectedly waiting for hours for transport to take them home.

Should public transport be such a hassle to the extent that terminuses morph into battlegrounds for fistfights over a seat on the bus?

How many people do we need to see collapsing due to exhaustion or different ailments as they wait for transport?

In Tanzania, research has shown that an efficient BRT system is rooted in diligent planning, sound operational and business models, integration between BRT and other modes of transport, efficient information technology systems, and an automatic fare collection system.

When locals juxtapose what other countries are doing versus what they see in their own state, one question pops up, senzeni na?

A country whose urban transport system is tottering on the brink of collapse is worsened by the deployment of police and city council “operations” that are not only out of touch with reality but expose the country as one suffering from serious policy deficiencies.

Last week, a crackdown on private vehicles that were helping ease urban transport woes resulted in a serious crisis that led to an unprecedented rise in transport fares.

As much as US$3 was being charged for a trip to Chitungwiza, US$2 to Mufakose, and US$2 to Damafalls, among other outrageous fares.

People get home late, exposing themselves to marauding robbers, who have developed a penchant for killing.

Social commentator Lazarus Sauti said: “Transport blues are proving to be a pandemic in Zimbabwe. People are struggling to get cheap transport to and from work. The costs are also prohibitive as they are eating up the largest chunk of people’s salaries.

In the midst of this man-made chaos, the ordinary man in the street ponders what exactly he did wrong to deserve this.

Still smarting from transport distresses, citizens are grappling with skyrocketing prices of basic commodities as inflation continues to rise.

While the gospel of budget surpluses continues to be preached, unabated facts presented by the World Bank (WB) in its social and economic update revealed that 7,9 million people in Zimbabwe fell into extreme poverty in the past decade and are living under the food poverty datum line of US$29,80 per person a month.

Further, the latest data from the Zimbabwe National Statistics Agency noted that a family of six now requires ZW$68 178 (US$428) to meet basic needs per month.

This on the parallel market is equivalent to US$170, which is insufficient to pay for rent, water and electricity bills, food, and transport for a family of six.

Analyst Tanaka Mandizvidza argues that fiscal discipline and budgetary control are needed to ensure the government has surplus money to invest in infrastructure and industrial development.

“The government should also rein in sacred cows involved in nepotism and corruption so as to ensure accountability and transparency, which are principles of good governance. Sound institutional reforms are also needed to strengthen instruments of policy-making and governance,” Mandizvidza said.

Further compounding the problems of citizens is the recent spike in school fees.