Her Superpower Is Rural Borehole Repair

Zimbabwe’s village pump mechanics are the quiet heroes who play a crucial role in ensuring residents have access to water. 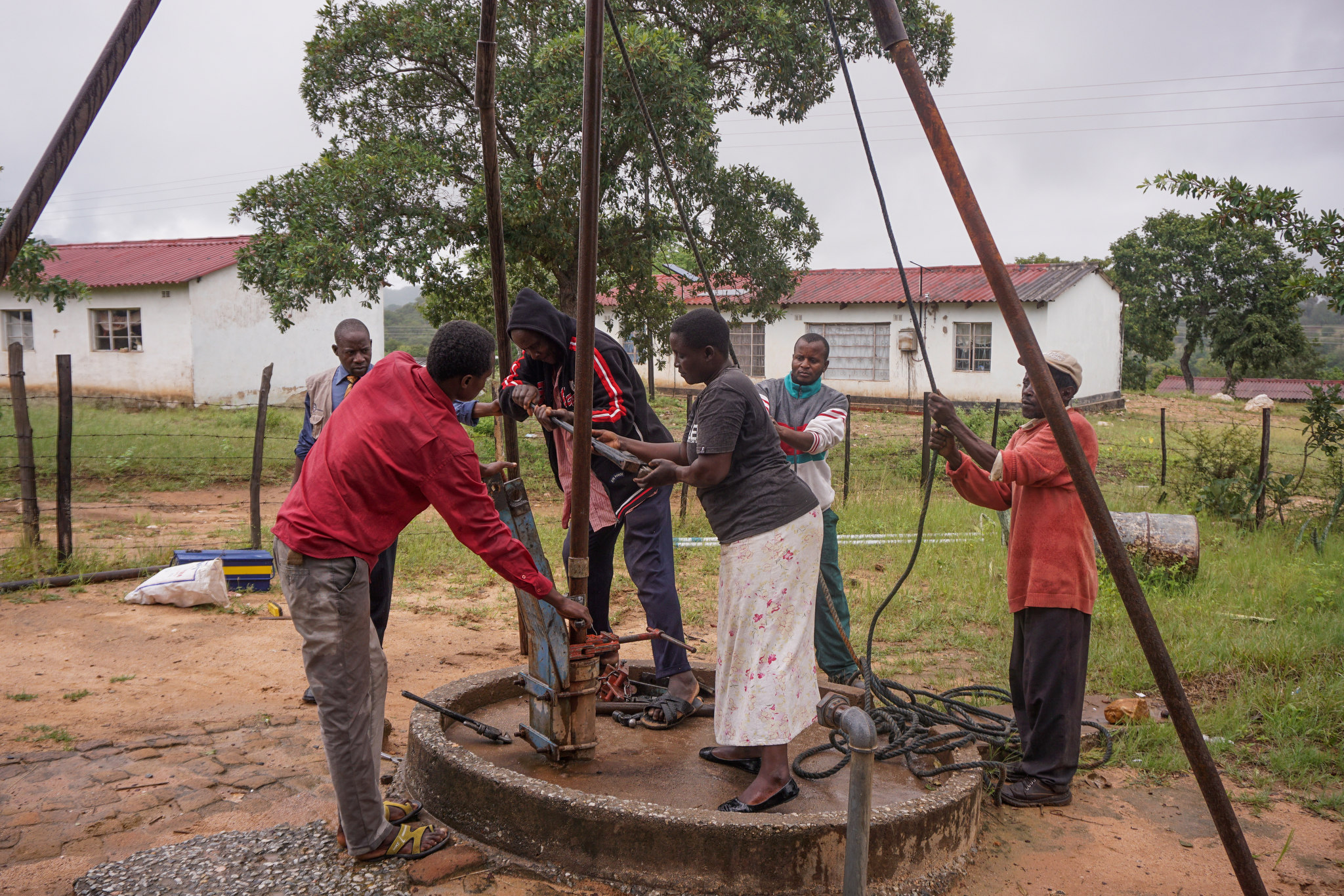 Primrose Masiyakurima, 39, center, and Walter Masibango, center-left, work to repair a broken-down borehole in Dora Pindo, a rural area on the outskirts of the city of Mutare, Zimbabwe on March 19, 2019. The borehole serves the community as well as a nearby school. (Evidence Chenjerai/Global Press Journal)

MUTARE, ZIMBABWE — When Primrose Masiyakurima trained to become a village pump mechanic, she didn’t know that she would later be regarded as a hero in Dora Pindo, a rural area of close to 3,000 households situated about 20 kilometers (12 miles) outside the city of Mutare, in eastern Zimbabwe.

She plays an instrumental role in ensuring her community and other nearby towns have a constant water supply through her knowledge and expertise in repairing boreholes, deep and narrow depressions carved into the ground to locate and extract water. Millions of Zimbabweans rely on more than 40,000 boreholes for their water, but repairs by government officials can take days. Masiyakurima and other village pump mechanics ensure access to potable water by repairing boreholes in rural areas.

“As long as it is a minor problem, it takes me hours to restore the borehole,” says Masiyakurima, 39. Many of the other village pump mechanics she trained with in 2017 have since abandoned the work, citing lack of payment — so Masiyakurima has mastered repairing boreholes on her own, or with help from community members.

The experience has paid off. “I always joke that I can even do this in my sleep,” she says.

Masiyakurima is one of nine women and 87 men trained as village pump mechanics under the Community-Based Management initiative, a component of the rural Water, Sanitation and Hygiene program in Mutare district. The program is a collaboration between the government and the United Nations Children’s Fund, known as UNICEF, to help ensure sustainable, safe water and sanitation for Zimbabweans in rural areas.

The program doesn’t provide the mechanics with a stipend, although sometimes community members will gather money to pay them. Masiyakurima says she usually receives $10 or $20 for a repair.

Repairs by the Department of District Development Fund, the government agency responsible for drilling and maintaining boreholes, are often slow-going; even if all spare parts are available, they can take up to three days. So Masiyakurima and her fellow village pump mechanics step in when they can to fix minor problems.

The Zimbabwean Constitution guarantees the right to safe, clean and potable water, but according to a 2020 report by the World Health Organization and UNICEF, just 63% of Zimbabweans have basic drinking water services. A 2020 Gallup World Poll reports that 53% of Zimbabweans are dissatisfied with local water quality.

The coronavirus pandemic has increased the need for reliable water supplies, especially for rural communities that can’t afford hand sanitizers and other personal protective equipment, and worsened the water crisis in Zimbabwe that existed well before COVID-19.

Zimbabwe has approximately 41,754 boreholes in various provinces, according to data by the Ministry of Lands, Agriculture, Fisheries, Water and Rural Resettlement. But the functionality of those boreholes stands at just 55%, due to the lack of repairs to those that have broken down, Dr. Anxious Masuka, head of the ministry, said in a parliamentary hearing last year.

In addition to the difficult work of making repairs to existing boreholes, local and government officials acknowledge a need to drill more.

Councilor Abu Masibango, of Dora Pindo’s Ward 35, says the 26 boreholes in his area — three of which aren’t working because they need spare parts — are not enough for the 2,900 households they’re meant to service.

To address the shortage, the Ministry of Lands, Agriculture, Fisheries, Water and Rural Resettlement plans to drill 44,600 boreholes countrywide by 2025. In 2021, the Treasury and other government ministries made available 1.11 billion Zimbabwean dollars ($7.4 million) to drill around 1,800 boreholes. It’s unclear if the ministry met the first phase of that goal in 2021.

Edwin Toriro, director of water supplies and maintenance at the District Development Fund, says that 629 boreholes of the 1,800 targeted for 2021 had been drilled as of September by both the group and development partners. The agency was responsible for drilling 203 of the 629, falling short of its target goal of 399, according to an agency report published in December. The final number of boreholes drilled by development partners last year wasn’t available.

Toriro says another challenge of maintaining sustainable water supplies is securing enough resources to make available spare parts for all the broken-down boreholes. The challenges the agency faces, according to the report, are lack of transport to get to areas to repair boreholes, shortage of fuel to do so, lack of spare parts and lack of tools to use in repairs.

“For the communities, parts cannot be sourced at local hardware suppliers but from a select few hardware stores, which increases the time and cost of fixing the broken-down borehole,” says Toriro.

“Being a woman in a male-dominated field has been a blessing to us as a community,” he says. “Women do not move around a lot, and they are passionate about what they do. We, however, know any problem with our water source, Masiyakurima is readily available for us.”

For Masiyakurima, motivation is found close to home.

“Being a mother, I know the struggles of walking long distances looking for water,” she says, “which is why I do what I do.”

Evidence Chenjerai is a Global Press Journal reporter based in Mutare, Zimbabwe.